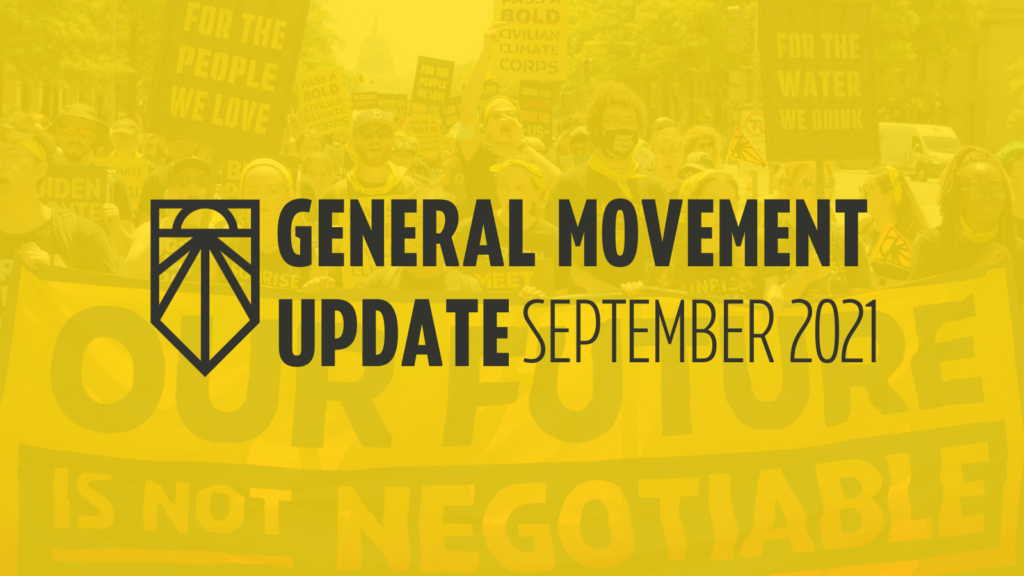 If you weren’t able to make it, here’s a summary of what we talked about:

We are in the final phase of this campaign! Right now, Congressional committees are deciding how much money to give to different programs or if anything will be cut. The House is back on Sept 20 and there’s an agreed upon deadline for them to vote on the Exxon plan (bipartisan infrastructure bill) by Sept 27th. The Progressive Caucus, Pelosi, Schumer and Biden have insisted that this bipartisan plan and budget reconciliation, which is where all of our priorities (like the CCC, funding for schools and housing) are, pass together. If Progressives hold the line, both bills could pass by Sept 27th. Of course, Congress rarely does what they say they will do, so we are making plans for the fight to stretch into October.

In order for the budget to pass, we need every Democratic Senator and just about every single Democratic House Member to vote yes. Some conservative Democrats have been throwing up potential roadblocks, like Sen. Joe Manchin saying he might not vote for the budget if it’s at $3.5 trillion and Rep. Josh Gottheimer saying we should pass the Exxon plan first and just wait and see with the budget. Meanwhile, corporations like Disney and Exxon are ramping up their lobbying big time to water down the bill. Our political team is working with the Squad and other movements to keep the pressure on all Democrats and we’ll continue to share information and any rapid response opportunities as they emerge.

In this phase, our movement needs to:

After a year we’re wrapping up the last bit of DNA development! A LOT of people gave input on this and we’re excited to bring it back to everyone. Which means…

How Movement Support Team (MST) can support you in the wake of a climate disaster:

What to do when disaster is about to hit/has just hit:

In August the newly formed Steering Team started to hit our stride! This was our second full month as a team, and we were able to start to dig deeper into some meaningful work together (even with many of our members using the month as a time for much needed time off).

Here are some high level things we worked on together in August:

Here’s what’s on our agenda for September:

During the call, hub members from across the country took to the Hub Digital Sharespace to answer a few questions and give regional share-outs on what they’re up to this month! Check out their answers to these prompts: