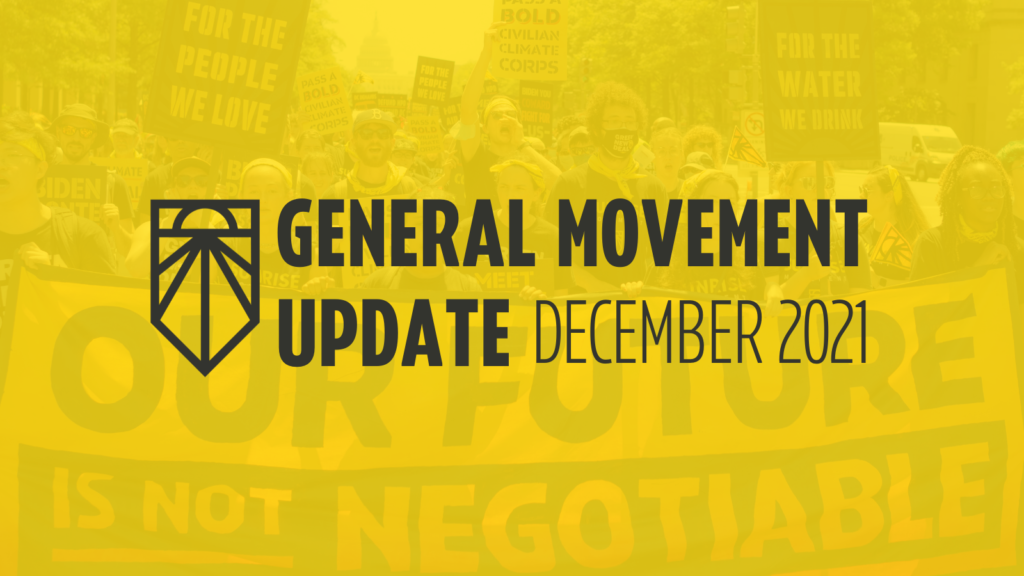 If you weren’t able to make it, here’s a summary of what we talked about:

1. Good Jobs for All Campaign Updates

Political Context: Where are we at in this moment?  What’s the lay of the land?

At this current moment, not much has changed over the past few weeks with the Build Back Better (BBB) Act. The House passed an almost $2T version of BBB that includes about $550B for climate. That’s the Civilian Climate Corps, clean energy programs and tax credits, and other federal efforts for the climate crisis. Universal pre-K, paid family and medical leave, lower drug prices are included in the current version of BBB too. The House passed this version, and kicked it over to the Senate, where it still sits. Senators Manchin and Sinema have yet to indicate their support for BBB, and we need all 50 Senate votes to pass it into law. Senate Democrats are trying to pass a version before Christmas, so then the House can get back and pass the revised version in the new year. If all goes well, BBB will finally have passed through both chambers so Joe Biden can finally sign it into law in early 2022.

Manchin is stuck on paid family leave it seems, and word on the street is it is likely not to be included in the final bill.

Last week, Haunt4Climate, the post-hunger strike crew in DC finished a week of action targeting Joe Manchin. They held vigils and sit-ins, confronted Joe Manchin throughout the week, and ended with meeting him on the dock outside his yacht. There are great photos and videos of all their actions, and you should check out their twitter and instagram.

Today, there was a rally in DC for BBB led by progressive activists and immigrants “Bring it home for the Holidays” rally.

There are no plans for Sunrise to do any more actions around BBB, but when the bill passes (hopefully) expect to see a mass call invite on Slack or in your inbox. It won’t be everything, not even close, pretty bare minimum, but it will be the final conclusion of our first legislative campaign and the first pieces of federal social-climate policy passed in the United States.

Here’s a small summary of the BBB fight from last month, and could be useful context if you are confused.

Take Action: Call for the GND

We’re keeping the pressure high on our Senators by flooding their offices with calls (especially key senators).  Join a phonebank to do your part or make calls at any time!

Part 1: State of Play: What’s been happening?  Where are we at?

Sooooo much has been happening in the land of Frontloading & Content testing in the last month!  Here’s a run down:

Part 2: Analysis – What have we learned so far?

While we’re only half-way through Content Testing, Sunrise’s Data Director recently consolidated some of the learnings and feedback we’ve gathered so far into these three reports!  Feel free to check them out to get a sense of what’s been vibing about the Sunrise 2.0 DNA draft, what hasn’t been vibing, and other main takeaways.  (NOTE: Please take these reports with a grain of salt!  They are still a fairly small sample size, because we’re only half-way through!)

There is sooooo much more in store as we head into the new year!  We’ll be gathering a lot more feedback, making adjustments to the DNA (story, structure, strategy & culture) based on that feedback, and we’re hoping to move toward clarity and ratification of the new DNA by April/May.

In the meantime, to stay engaged:

Jessica Cisneros in TX-28, a 28 year old immigration attorney from Laredo is running to unseat Henry Cuellar, arguably the most conservative member of the Democratic Party. He’s taken over 800,000 dollars from the oil and gas industry throughout this career and is anti-choice, anti-immigration, and just all around really not good.

We’ve seen over the last four years just how critical it is to have movement allies like Jamaal Bowman, Cori Bush, and AOC fighting alongside us in Congress. And we just need more of those people in Washington doing their thing. Cori Bush and the movement made the eviction moratorium happen, Jamaal and the movement made the Green New Deal for Public Schools legislation a reality. The more movement champs in office, the more radical change becomes possible.

We’ve really internalized as a movement that elections are but one tool in our organizing tool box – they’re an important arena for us to fight in public about our  vision for a better world. They help us build a bigger tent, a bigger movement. Electing any individual candidate will certainly not save us, but we can use elections to grow our power and organizing skills.

Together we can prove that progressives can win. Democrats could lose big time across the board, like badly, and lots of people are gonna blame that on the party being too left. If we can win with some progressive candidates, we’ll prove that Dems lose not because they’re too left or too radical, but because they’re too corporate and too incrementalist and too committed to the status quo.

We’ve been spending a lot of the past few months preparing for the election season and midterms in 2022. Knowing this, we’ve been working on improving our resources and systems regarding elections and endorsements especially when it comes to the back and forth between Sunrise National and hub members across the country. We’re gonna be releasing a few of those resources throughout the next couple months:

Refresher: What is the Steering Team?

What are the top line things the Steering Team tackled this past month?

Where can people go to get more information or engage with the Steering Team?

Sign up for a Hub Troubleshooting Session today!  We’re here for you!