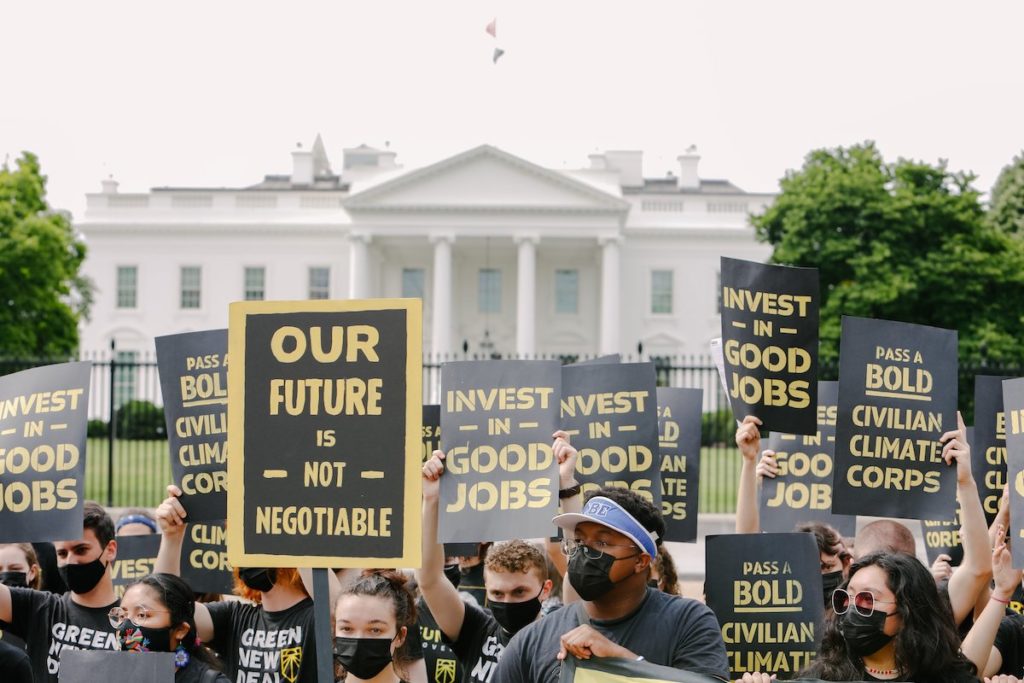 In 2020, young people organized in historic numbers to take back Congress and elect Joe Biden on a bold climate mandate. Our priorities then were clear as they are now: confront the twin crises of climate change and economic insecurity, root the solutions in racial justice, and put our politics on a path that makes a livable future possible.

We did our job, and delivered the new President a commanding victory. In 2021, it’s time for Joe Biden to do his. Our futures and our lives are not negotiable.

Right now, President Biden and the Democratic Party’s biggest political priority is passing a massive, multi-trillion dollar infrastructure package called the American Jobs Plan that will transition the energy grid, repair our crumbling roads and bridges, and jumpstart the care economy of the 21st century. This infrastructure bill is about climate, it’s about jobs, and it could create a fully funded Civilian Climate Corps that would put over 1.5 million Americans to work in good-paying union jobs that will slow the climate crisis by building sustainable infrastructure.

On its own, this bill is not enough to tackle the many crises our generation faces, but we need to start somewhere, and this package can lay the foundation for future wins down the road. This is the best shot our movement has at kicking off the decade of the Green New Deal. But so far, the Biden administration’s proposal has not matched the urgency of the crises we face.

Instead of prioritizing the rapid investment in jobs and justice we need, Biden is prioritizing appeasement and negotiations with the racist, anti-democratic Republican Party, and with every passing day, his plan becomes weaker, smaller, and fails to meet the challenges we face. Biden is wasting time attempting to work with Republican leaders on a bill, and could compromise on key climate and progressive priorities in the process.

On top of it all, Biden’s administration is defending massive fossil fuel projects in court and has yet to revoke the permit for Line 3, a tar sands pipeline that violates the treaty rights of the Anishinaabeg people, threatens a critical water source for millions, and would lead to more pollution and emissions from fossil fuels.

President Biden has called the climate crisis “the number one issue facing humanity” and his infrastructure plan a “once in generation investment in America.” He needs to act on those words by opposing poisonous oil pipelines, and refusing to whittle his own proposal away.

Our generation has spent our whole lives watching politicians negotiate away our futures – but the time for incrementalism, half measures and compromise is over.

Our movement is fighting for a Green New Deal that includes a federal jobs guarantee and ushers in a new era of American prosperity. We want an America where workers have living wages, workplace protections, and the right to unionize, communities that have borne the brunt of systemic racism benefit from government employment projects and a stronger social safety net, and young people no longer live in fear of a dangerous and unstable future.

We need to pressure Biden and Democrats in Congress to pass the most ambitious infrastructure package possible, which will open the door for more policy wins in the future.

If Biden and the Democrats are serious about passing a once in a lifetime bill, they need to stop listening to Republicans and start listening to the people who put them in office. Here are our demands for the Biden administration and Democrats in Congress as they work to pass this infrastructure package:

Today, a group of young people from Sunrise Movement are outside the White House making these demands clear to President Biden. We are taking the power of our movement to Biden’s doorstep and we refuse to leave until our demands are met.

Today’s action is a message to the President and an invitation to our movement. To everyone in our generation: if you also believe that more must be done, join us in Washington DC on June 28th to make sure that Joe Biden, Congress, and everyone else tasked with addressing the climate, economic and racial justice crises do their jobs.

While we risk arrest at the White House, our movement is gearing up to take action all across the country. Young people are marching hundreds of miles in Northern California and across the Gulf South and will bring their demands straight to the halls of power at actions later this month. Our movement will take action in Washington DC, San Francisco, Houston, along the proposed route for Line 3, and in cities and towns everywhere.

2021 began in violence. But if we take decisive action together now, it can end with hope for the future. This is our shot and we will not allow that to be negotiated away.