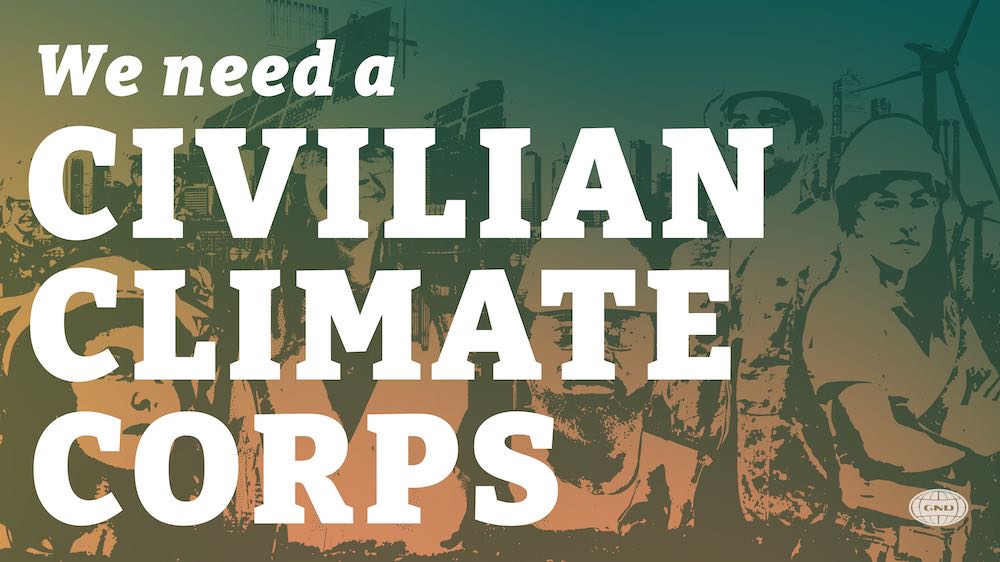 What is the Civilian Climate Corps?

The Civilian Climate Corps is a visionary policy that would create a government jobs program putting a new generation of Americans to work combatting the climate crisis.

More specifically, it’s a program organized through the Department of the Interior and Agriculture and aims to “conserve and restore public lands and waters, bolster community resilience, increase reforestation, increase carbon sequestration in the agricultural sector, protect biodiversity, improve access to recreation, and address the changing climate.”

Where does the idea come from?

The program succeeded in pulling millions of men out of unemployment and drastically improved our nation’s natural infrastructure during the lows of the Great Depression, but the Civilian Conservation Corps had deep flaws, including exclusionary racist and sexist practices of hiring almost solely white men and its nonconsensual development on stolen Native American land. That’s why to succeed this time around, the modern Civilian Climate Corps must be deeply rooted in equity and equality and be brave enough to face the scale of the crises of our time. We have an opportunity to fight for a Civilian Climate Corps deeply rooted in justice and equity, that could prioritize giving good jobs to communities who have been disproportionately harmed by the climate crisis, systemic racism and our broken economy.

During the 2020 presidential campaign cycle, Sunrise spearheaded the idea of a new Civilian Climate Corps, one to give people good, dignified jobs combating climate change and serving the public. Specifically, Varshini pushed for it on the Sanders-Biden task force to be in Biden’s Build Back Better plan and Sunrise launched digital campaigns around the idea. Since then, it has been brought to the forefront of politics by both President Biden and climate champions in Congress.

The Current Status of the CCC

In January, the Civilian Climate Corps was established as part of President Biden’s executive orders on climate, but had no funding to make it a reality. Then in March, Biden asked Congress to provide $10 billion over 10 years to fund the program as part of his nearly $3 trillion American Jobs Infrastructure bill(AJP). Now the AJP is headed to Congress, where programs like the CCC will be negotiated on and ultimately put into a massive infrastructure package that Congress will vote on and Biden will sign into law, likely by August or September.

Right now, there are a handful of Civilian Climate Corps proposals floating around Washington DC. It’s our movement’s job to make sure the most ambitious version of a CCC that’s rooted in justice makes it into the final infrastructure package, and that that package is signed into law.

So far, Biden has been pretty vague about the details for his version of the Civilian Climate Corps , other than this statement: “This $10 billion investment will put a new, diverse generation of Americans to work conserving our public lands and waters, bolstering community resilience, and advancing environmental justice through a new Civilian Climate Corps, all while placing good-paying union jobs within reach for more Americans.”

While this sounds good, environmental economists and policy makers agree that this amount of funding doesn’t get close to what we need to address the crisis. Roosevelt’s original CCC employed around 300,000 young Americans per year at a time when the US population was ~40% what it is now. Biden’s proposed CCC would invest $10 billion over a decade, equating to about 10-20,000 jobs a year.

What is the CCC We Need?

The Civilian Climate Corps proposed in Ed Markey’s bill would give millions of people good jobs fighting climate change and transforming our society. If passed into law, it would signify the beginning of the decade of the Green New Deal, and open the door for better, bigger employment programs down the road.

What would a robust Civilian Climate Corps do?

The Civilian Climate Corps  would give good jobs to the millions of people who are out of work or underemployed and suffering from the effects of a global pandemic and severe economic recession, and work in partnership with unions and employers to give them a pathway to stable, meaningful careers for the long haul. Our country is facing so many crises, historic joblessness and economic inequality, gun violence, frequent murders of Black and brown people by the police, state repression of protestors and a climate crisis that looms over it all. With so much work to do, there’s no reason anyone who wants a job in the richest country in the world should be unemployed, underemployed, or working a job without a living wage, benefits, or the right to join a union.

We need millions of people doing the good work of addressing these crises, and we need to force the federal government to put proposals like the CCC into law at the necessary scale. Imagine a world where millions of people, recent high school graduates and middle-aged alike, could work on projects protecting communities from sea-level rise,  taking care of the elderly, distributing fresh produce in food deserts, restoring wetlands, and rebuilding after climate disasters, while getting paid a living wage, having access to healthcare, and getting apprenticed to continue their career, instead of working a shitty job at Amazon making Jeff Bezos richer?

These jobs will include more traditional climate careers, but should also include jobs that help communities become strong and more resilient. Your CCC career could be caring for the elderly, creating graphics to help promote climate policies in your town or city, community and child education, organizing localized food programs, or building out new community systems to limit carbon emissions and pollution in your community.

We want the government to invest in, and scale, the mutual aid work that keeps society running during the pandemic. With Green New Deal jobs, you can build friendships with the local farmers who supply the burger patties. Democracy in the workplace means everyone can pitch projects to improve their 9 to 5. By choosing not to be a robot to maximize profit, you can strengthen your community. That simple philosophical shift can make all jobs “Green” – non-extractive, planting something beautiful for your hood and future generations. If our government makes Green New Deal jobs as good-paying and meaningful as possible, we can raise the bar for all employment.

Whatever your career is the Markey plan is calling for:

How we can win a Civilian Climate Corps

In more ways than one, the past four years of our movement’s work have been leading up to this moment. We can back up our Green New Deal champions in Congress and force the federal government to enact a program creating millions of good jobs fighting climate change.

We want to see what was laid out in Markey’s bill signed into law. The first step in that process is by getting the CCC passed as part of Biden’s larger infrastructure package, so it’s our priority to make sure the CCC is included in that package and that the package ultimately passes.

Instead of passing each different bill individually, the Democrats in Congress are likely going to use a process called “budget reconciliation” to pass their priorities into law. Using reconciliation, they can include many pieces of legislation into one big bill that will pass (or fail) through a single up-down vote. Dems think this will give them a better shot at passing many of their political priorities since they are included in one big infrastructure package, not stand-alone bills, and would need to get 50 not 60 votes to become law.

The fact that the infrastructure passage is likely to pass through reconciliation also means that Democratic leadership – Biden, Chuck Schumer and Nancy Pelosi – will have a lot of say over what is included in the final infrastructure package, and building loud support in the public for the CCC we want (Markey’s version) is going to be the best way to pressure them – especially Biden. Because it’s unlikely that we will win many individual pieces of progressive legislation right now outside of the reconciliation process, our take is that if we can reshape and pass Biden’s bill through public support we can build up the power, funding, and focus of the CCC to create the program Senator Markey put forward in his bill, which is the CCC we deserve.

Our movement needs to work together to build broad support in our communities for Markey’s version of the Civilian Climate Corps, pressure our Members of Congress through actions  to sign the Good Jobs for All pledge and prepare to mobilize to ensure the first step of the CCC bill actually passes later in the summer.

What We Can Do Now To Get the CCC

The country stands at a crossroads between Biden’s symbolic gestures at change and the bold action we need to address the crisis. We need, we deserve so much more than is currently on the table. Here are some opportunities to get more information and get more involved: