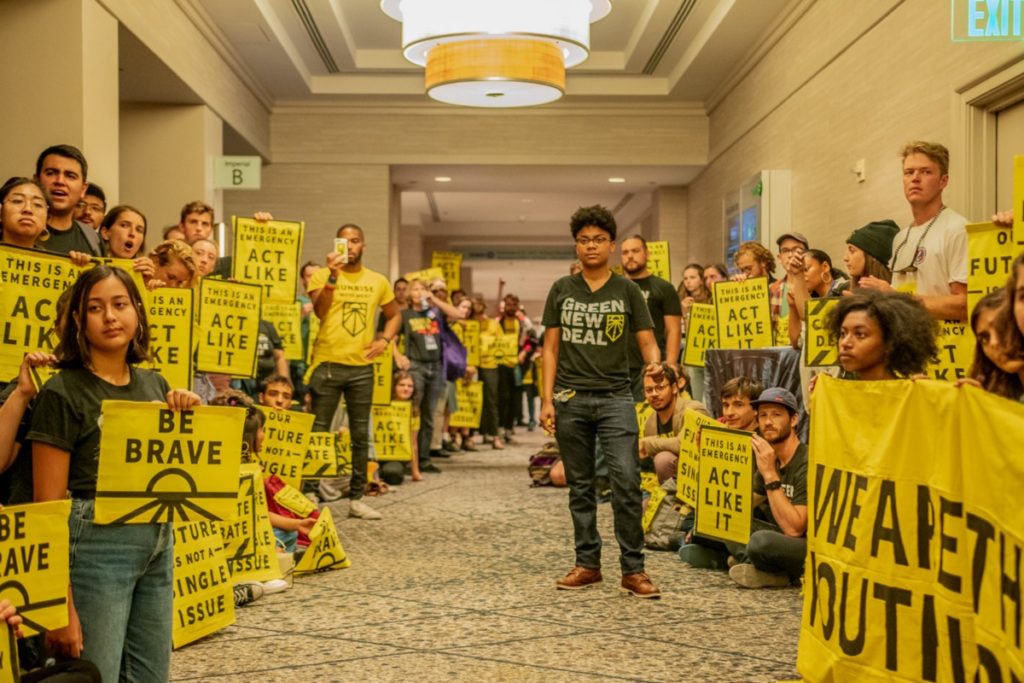 Young People Are Ready to Lead — Get Out of the Way

For decades, the Democratic Party claimed that the demographics of younger generations would herald a bright future, a multiracial coalition of young voters unburdened by the racial division of the past and united in a vision of a truly inclusive future.

The 2008 election felt like a start to delivering on that promise.

Before the 2008 primary, Hillary Clinton looked like the shoe-in for the nomination. Her win would have meant we’d had a Bush, a Clinton, a Bush, and then another Clinton as presidents back-to-back, sending America well on its way to becoming a full-fledged oligarchy, where your last name determines your eligibility to be president.

But then — seemingly out of nowhere — came a presidential candidate our generation fell in love with: Barack Hussein Obama. He didn’t try to temper our expectations with cynicism, to tell us what we could and couldn’t accomplish. Instead, he made his slogan a resonant battle cry of youthful defiance: Yes we can. Si, se puede. It wasn’t about him. It was about us.

We heard that message of empowerment and we turned out in force. Obama won young people by record numbers, pushing him to a compelling electoral victory. It looked like the foretold youth coalition had finally arrived.

Then came the 2016 election and with it some sobering truths, particularly for white Americans who had begun to believe that racism was over. The first Black president was followed by a backlash president, intent on opposing everything his predecessor stood for. It turned out that the older coalition was still around, kicking and angry.

We must win in 2020 and reject these politics of hate. To do so, we will need youth voter enthusiasm like we had in 2008. This time around, the young, generational Obama coalition has lined up behind Bernie Sanders, who is delivering that same message of optimism, possibility, and ambition. It’s exactly what we need, at a time when despair — whether over Trump or over the climate crisis — feels poised to take over.

So why do the Democratic establishment — and in their wake, so many older voters — seem dead set on opposing the very demographic they have long promised will save everyone: the young, multiracial generations of millennials and Gen Z?

Many entrenched Democratic Party officials see Sanders as the worst-case scenario and orchestrated the mass endorsement of Joe Biden by every other candidate the weekend before Super Tuesday. The resulting media surge ($77 million of free press), pushed Biden from a strong second place to being the slight frontrunner overnight.

But who didn’t follow this surge? Young voters. On Super Tuesday, we continued our deep support of Bernie Sanders, even in Alabama (his worst-performing state), where he took home 46% of the youth vote: a significant plurality. Among young Latinx voters, those margins are even wider, with Sanders winning a whopping 84% of Latinx voters under 30 in California, to Biden’s 5%.

We need that level of young voter enthusiasm to win in the general election against Trump. And we must beat Trump.

The climate crisis threatens the habitability of the planet — within our lifetimes — and Trump is a climate change denier.

The future of a multiracial, multicultural society (like our generation represents) is threatened by rising ethnonationalism around the world — in Brazil under Bolsonaro, in India under Modia, and in America under Trump.

Democratic party officials — and the biased media industry they rely on — are gambling on our future, betting that we can beat Trump without youth enthusiasm. That is a losing bet. Democrats need to learn one important lesson from the past 5 elections:

Why should we believe that moderate, “electable” Joe Biden will fare better than the radical optimism of Bernie Sanders?

If Biden does win this primary, I hope the threat of Donald Trump will be enough to turn young voters out. But why gamble with the future? If we want to win elections, youth passion is the sure bet.

Even a few percentage points of decreased enthusiasm could cost us the presidential election against a dangerous despot. Meanwhile, a fire in our belly like we had when Obama was elected could secure not just the presidency, but the Senate, allowing us to pass democratic reforms and progressive policies.

The Democratic Party has long called the Obama coalition — a multiracial youth generation — the future of our Party. Well, the future has arrived. It’s time to let us lead.