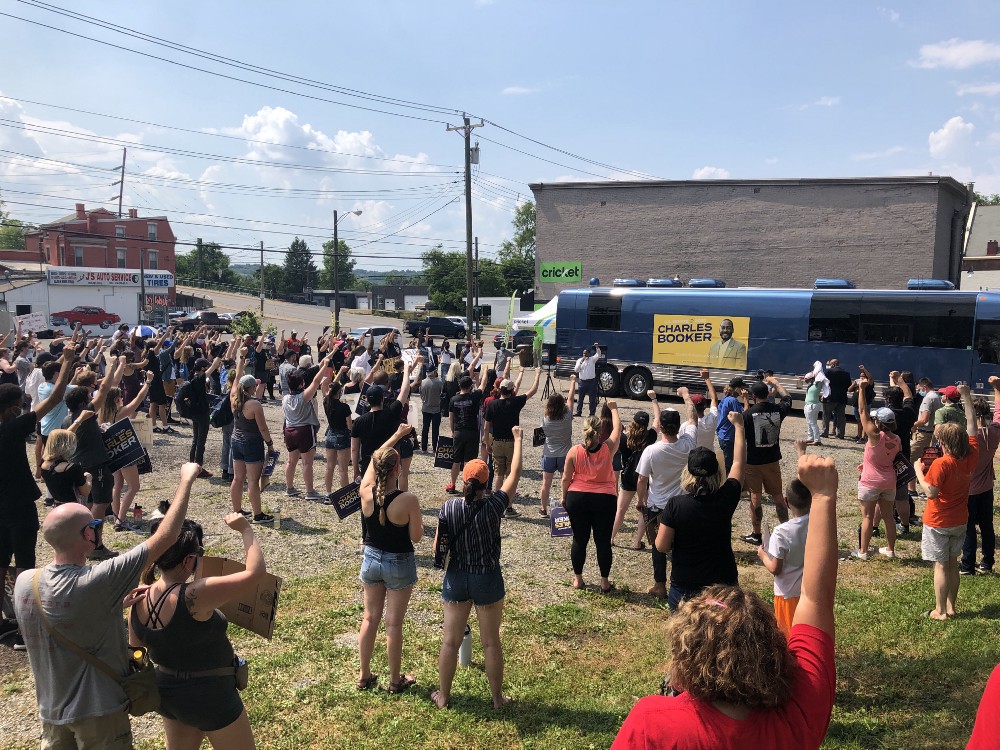 I’m writing from Kentucky, where I’ve been since last Sunday, throwing down with others to see if we can help push Charles Booker’s insurgent campaign over the finish line as ballots are cast tomorrow. I’ve been thinking a lot about what it means to “win” in electoral politics as a movement, and I wanted to write some thoughts down to share with you all before the final ballots are cast in the two June 23rd primaries we’ve been focused on for Jamaal Bowman and Charles Booker. I hope my reflections might be helpful or meaningful for you all in the coming hours and days.

The energy here in KY is electric and it’s clear that something incredible has been happening. Just as in New York and around the country, the momentum in the streets is being channeled into our politics. In the last few weeks Jamaal Bowan and Charles Booker’s races have become the center of national political attention, and Sunrise Movement has been an instrumental part of that. We’ve been with both of the candidates since Day 1, made hundreds of thousands of phone calls for them, helped them rack up major endorsements, supported their political and communications strategies, and more. After all the mail-in and Election Day ballots are tallied sometime later this week — we might just make history. I hope everyone will do everything they can to make that possible in the next 24 or so hours before the polls close. Sign up to phonebank for the final push: smvmt.org/phonebank

But I want to be real, we might lose both of these races. In fact, losing is the most likely outcome, and always has been. Charles and Jamaal are huge underdogs, and the establishment has been throwing everything they have at us in the last few weeks to try to blunt our momentum. In the last week alone, millions and millions of dollars have been spent in both of these races to try to attack our candidates and bolster their opponents. On top of that, we luckily had mail-in voting in both of these races, so more people could safely cast their ballots during the pandemic, but that also means that many ballots were already cast as momentum for our candidates was just picking up in the final weeks. It’s likely these races are going to be VERY tight, and we may not know the results for days. When those results finally do come in, they may not be the results we’ve been hoping and working for.

Losing sucks, and we all know our movement could use some wins right now. From the 2008 financial crisis, to the climate crisis, to this pandemic and economic crisis we’re suffering from now, Trump’s election, and more…our generation has suffered a lot of losses. We’ve got everything stacked against us. We’re the underdogs, and so are our candidates. Every now and then, the underdogs score a victory — and it changes the world forever, upends the political common sense, and defines a new normal. But most of the time, us underdogs lose.

Losing sucks especially when it feels like we’re on the cusp of victory. Anyone remember Bernie? Yeah.

But also, anyone regret backing Bernie? I sure don’t. Why?

Because first and foremost, we used our engagement with the campaign to help grow the movement, and that’s been happening with these races, too. Both nationally, and in NY and Kentucky. It’s been so amazing to see so many new leaders step up with passion and creativity to take on these fights. We’re also really lucky to be working with amazing candidates and campaigns who care about our movement and want it grow as well.

Second, when we fight and lose but get close, it helps us grow our political power and changes the political calculus. Bernie lost, but now one of our movement’s leaders, Varshini, is helping to write Biden’s climate plan. In 2018, we endorsed Abdul-El Sayed for Governor in MI and Cynthia Nixon for Governor in NY. They both lost to Whitmer and Cuomo, but we moved them both to the left significantly on climate and the environment, and they’ve now governed in a more progressive stance than they would have had we not challenged them with those primaries. If we leave it all on the field, but fall short on election night, we will still shift the political calculus in these states and districts for a progressive agenda.

Lastly, we’re the people who try the impossible until it becomes inevitable! We fight the impossible fights not because they are easy, but because they are worth it. People once said climate would never be a top political priority. We believed it was possible, and we made it so. And with every loss, we learn and grow stronger, and make winning that much more likely the next time around.

All that’s to say, elections come and go, we win some and lose some. But the real prize is the movement that we build throughout it all.

So as we get ready for this final sprint, I just wanted to send a note to our movement: let’s give it our all in this last day, but no matter what happens, remember that as long we keep building people power and political power — as long as we stay committed to growing the movement — we are winning, no matter what the pundits say. And one day we will win it all, sure as the sun rises each morning.

To close, I wanted to share my experience with the Charles Booker campaign. I’ve had the privilege of being with Charles when he was first making moves to run, working with him throughout when no one believed in what we were doing, and of traveling with him around Kentucky in the final stretch of this campaign when the world started paying attention.

When he told me about why he was running, I remember him crystal clear saying to me, “Win or lose, I believe this campaign can help build the movement in Kentucky, and build progressive infrastructure in the state for the long haul.” After he told me that, I knew this was a campaign worth our movement investing in and believing in, and we’ve been all in building the movement alongside him since then.

At the start of last week, Charles, speaking in front of a crowd of hundreds, closed a rally saying, “I’ve got some news for y’all: We gon win this race! In fact, we’ve already won.” The crowd went wild.

As he said those words “we’ve already won” tears came to my eyes as I thought about the thousands of Kentuckians — Black and white, old and young, rural and urban, “from the hood to the holler” — that have poured into the streets in recent weeks demanding justice for Breonna Taylor and David McAtee, saying that “no lives matter until Black lives matter.” I thought of the farmers and coal miners who have been inspired by Charles’ vision for a Green New Deal, and the young Kentuckians whose lives have been ruined by Mitch McConnell as long as they’ve been alive believing they have the power to oust Mitch McConnell for the first time.

Charles is right. This movement has already shown that a new way is possible in Kentucky. That there is hunger for a different type of politics in the South. That the people and places everyone has written off shouldn’t be ignored. In New York we’ve shown that politicians like Eliot Engel can’t take their constituents for granted while they amass power for themselves in DC. No matter what happens after all the votes are cast and when the final ballots are tallied, Charles is right — we’ve already won.

Thank you for being a part of this grueling, impossible work. It’s the honor of my life to fight alongside each and every one of you.

Sign up for your final GOTV shifts here: smvmt.org/phonebank