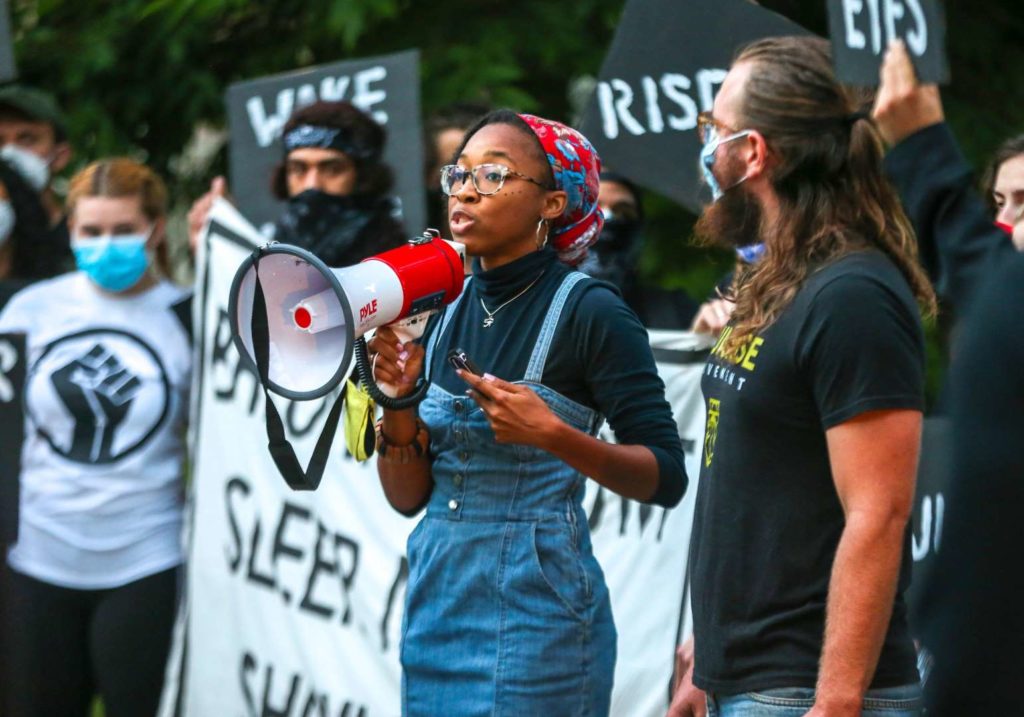 If you care about the Green New Deal, we need you to join the Movement for Black Lives

In the last three weeks, millions of people have risen up to demand our nation live up to our values and see the humanity of Black people in this country. Sunrise has made supporting these uprisings a top priority. As we’ve done that, I’ve been asked why this is something we are focusing so much energy and attention on while climate change still threatens our way of life.

Like so many millions of people around the country, I’ve felt a deep, personal calling to take action in this moment. I want to share with you why I believe it’s essential that our movement take part in the Movement for Black Lives right now.

We must see the fights for racial justice and climate action as two fronts of the same fight. If our society valued Black, Brown and Indigenous lives, we wouldn’t be in the mess we’re in with climate change in the first place. If Black Lives Mattered, we would have had a Green New Deal a decade ago when Katrina killed 1833 people and left tens of thousands more without homes in predominantly black neighborhoods in New Orleans. If Black lives mattered, we would have invested in our infrastructure when it was clear that Black communities were dying and being poisoned from polluted water in cities like Flint, Michigan. When the middle-class, white community of Bismarck, North Dakota objected to the Dakota Access Pipeline, it was rerouted through Indigenous lands. If the Movement for Black Lives wins, it also advances our collective mission of ensuring that we enact a Green New Deal that includes and empowers Black and Brown people and other marginalized communities.

Historic moments like the one we’re living through right now have the power to fundamentally change our entire society and politics for a generation, for better or worse.

I remember in 2015, I was sitting at a training organized by Momentum, a movement strategy training institute, and they talked about how change usually happens very slowly in fits and starts, and then all of a sudden something big happens and many things can change all at once. These “moments of the whirlwind” are when the rules of organizing and politics are totally upended. People feel moved to take action in record numbers and politicians run to catch up with the times. During moments like this, there is incredible opportunity to change what is seen as politically possible for decades to come. This is what happened with Occupy, at Standing Rock, and with the March for our Lives movement.

For the past few weeks, we’ve been living in one of those moments. In two weeks, public support for the Movement for Black Lives increased by 28%, almost as much as it had in all of the last two years.

This past month, Black organizers have brought our country to a moment of reckoning with what and who we value in powerful ways. They’ve pushed everyone to reexamine how and where we spend or resources: toward pain and punishment for our communities? Or toward investing in Black life and dignity?

It is essential to challenge racism and racial divides to win the kind of just and equitable Green New Deal we need.

For all of American history, elites have used race to divide working people. They claim that we can’t have strong social programs because “welfare queens” will take advantage, that the reason people are losing their jobs is because of immigrants, that government programs like food stamps and housing assistance are wasting money on people who are lazy or undeserving. These thinly veiled racial epithets hide the truth: that elites want to grow their own wealth, not fund these programs, and they’re using racism as a tool to do that And as long as those in power are able to use racism as a way to stigmatize government action for the common good, as long as our government sees our Black communities as disposable and undeserving, we will struggle to build support for the Green New Deal.

And let’s be clear: the roots of runaway climate change and our violent policing system both come from the same sick notion in our country that some lives matter more than others, that some people are disposable, that some people can be sacrificed for the profit and comfort of others. We reject that notion wholesale. Defunding police and enacting a Green New Deal means stopping what kills our communities and investing in what allows them to thrive: good jobs, healthcare, education, affordable housing, clean water and air.

As we move towards that vision, we need to tackle racial injustice head on as a movement. Since we are living in a society stained by racial prejudice and injustice, if big social programs don’t actively promote racial justice, they exacerbate existing inequalities. The original New Deal made this painfully clear. Its housing programs allowed whites to build intergenerational wealth while locking out Blacks and other racial minorities. I’m deeply committed to making sure we win a Green New Deal that does not make the same mistakes, but it’s only going to be possible to get something like that through Congress if we also tackle racism writ-large in our society and politics. We need to make it morally and politically unthinkable for Congress to pass major legislation that doesn’t put racial justice at the forefront.

This is also a critical opportunity for us to build the movement of movements we need to change that common sense and win big changes like the Green New Deal.

One of Sunrise’s principles is “We stand with movements for change.” It says: “Stopping climate change requires winning and holding power at every level of government. This is a huge job and we can’t do it alone.”

At the end of the day, winning a Green New Deal is about changing the common sense: about building a society where the government is responsible for the common good, works to guarantee good jobs, and values the worth and dignity of all people. We’re not there yet. In order to build that common sense and win the Green New Deal, we need a movement of movements who are holding their respective roles and moving forward their issues, while being united in a shared vision of society and ready to come together when fellow movements have all-hands-on-deck moments.

When the movement for the Green New Deal has our “moment of the whirlwind,” we’ll want others to be ready to jump into action alongside us, so we need to model that behavior ourselves. That’s especially important for us because the long history of the mainstream environmental movement not prioritizing economic and racial justice has understandably led to skepticism toward the climate movement at-large from racial justice movements.

We’ve seen the power and potential of that movement of movements in the past few weeks. A few weeks ago, there was a real possibility that Trump and the forces behind him would prevail and, rather than talking about defunding the police and investing in Black communities, we’d be talking about looting and ‘violent protests,’ which would have set Trump up to appeal to fear and do who knows what in the name of order. That didn’t happen, because millions of people closed ranks and said no way, but that required movements like Sunrise rallying behind the Movement for Black Lives during this critical moment.

This weekend will be historic, perhaps the biggest wave of action for racial justice in our country’s history. If you don’t already have a plan to join, find an event near you and make a plan.

As we take action this weekend, we’ve got to remember that this isn’t just about one weekend or one month. We need to see and understand the fight for racial justice as the fight of and for our lives and the lives of our friends, families, and neighbors.

I want to be clear — this is not going to be easy or simple. Fighting for liberation is a process that will take years, a process where we will all be called upon to be our best selves, to make mistakes and take risks, to experiment and learn. At Sunrise, we could not have gotten to this place without the leadership and courage of many Black, Brown and Indigenous volunteers and staff, who constantly called upon our movement to set ourselves on the path to collective liberation and pushed us to be better. I also feel tremendously grateful to our sister movements, particularly Dream Defenders, United We Dream, and the Movement for Black Lives. Our months of relationship-building together have allowed us to show up in deep and evolving ways these past weeks.

I want to leave you with a quote I’ve been reflecting on a lot lately. It’s from George Goehl’s interview with my friend Maurice Mitchell, who’s the National Director of the Working Families Party and a leader with the Movement for Black Lives. When asked what his message was for non-Black people at this moment, he said:

“What I tell non-Black people is that your anxiety around possibly getting something wrong has nothing to do with my liberation, nothing at all. So if the reason you are sitting on your hands is because you are afraid of making mistakes, then that really is a personal, insular, self-centered concern, that isn’t a collective communal social change concern. You don’t want to deal with the discomfort, the shame that might come along with getting something wrong. That has nothing to do with me, it has nothing to do with my freedom or with collective freedom. You need to do the work personally to get over that. And understand that the human condition is frail and it is flawed and by your very nature, you will get things wrong and just engage that and go out and fight. Now that doesn’t mean you aren’t intentional. Be intentional, but ACT.” [26:50]

In that spirit, I want to share three intentions I have: