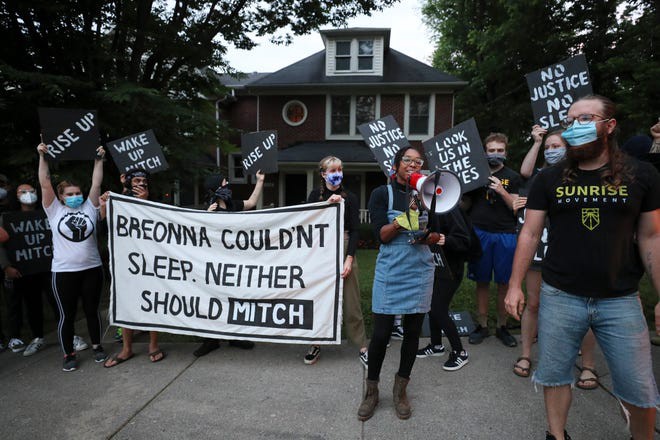 In the early dawn light of Juneteenth, a group of brave people stood outside Mitch McConnell’s house in Kentucky to make some noise. Tension was high. It’s not a joke to show up on the doorstep of a major politician like Mitch McConnell — not when cops are disappearing people off the streets in places like Portland when they don’t like what they see. Cop cars circled around the group. They were nervous.

They sang. They shouted. They held up signs and stood stoic. And the energy grew. Cars honked in support as they passed. Mitch’s own neighbor walked outside to join them. She yelled, “It’s your future too, Mitch!”

Taking the cue in DC, another group rallied their bullhorns outside of Councilmember Anita Bonds’ house at midnight. They demanded better for DC residents who couldn’t afford to keep their homes. Neighbors cheered them on from the sidelines.

It happened again in Providence, as protesters blew air horns in front of the Mayor’s house, and again in Georgia, where a nighttime block party was scheduled outside the Governor’s house.

So why are young people around the country interrupting the sleep of local politicians?

Believe it or not, these tactics are over a century old, inspired by the Wide Awakes, a pro-abolition mass youth movement in the 1860s (right before the Civil War) who turned anti-abolition representatives’ lives into waking nightmares.

Wide awake to the moral iniquity of slavery, they called out slavery supporters as reprehensible and criticized leaders who had dragged their feet on abolition as weak-willed and complicit.

They ensured the safety and democratic rights of those who envisioned a world where slavery was abolished, rallying around pro-abolition speakers and politicians, serving as defenders and poll watchers.

These young people grew up in a world as similarly fraught and polarized as our own, and they took sustained radical action to match the moment. Our generation has lived our whole lives in the wildest dreams of a few billionaires. While they line their pockets and boost the stock market, we’re losing sleep over unpaid bills, student loans, and the rent due in a few days. While they have the best healthcare money can buy, we’re watching our local hospitals and healthcare workers struggle as the national body count grows. While they’re hiring private security to “keep them safe” from us, the police are kicking in our neighbors’ doors and kneeling on their necks, then tear gassing us when we protest.

We were born into crisis, inheriting a failing world. We tried signing petitions. We tried calling and visiting government offices. Through it all, most politicians ignored us. Now, we’re taking actions they cannot ignore. Our generation is done asking nicely.

We are Wide Awake. And, for the next hundred days, the architects of this death economy will be too.

This is not just an uprising, it’s a mothafucking haunting. We will march to their homes at midnight so they understand that we are wide awake to their role in crafting this nightmare. When they try to dine at restaurants we’re forced to work at — despite the risk of COVID — because our unemployment is ending, we will not serve them. When they do nothing to stop federal agents from snatching us off the streets, when they force us to go back to school in unsafe conditions, when they do nothing to stop our democracy from crumbling, we will bang on their doors from dusk until dawn and make them hear us. We will make their lives a waking nightmare until they stand with us or give way to the power of the people and the vision we have for a new world.

The original Wide Awakes were relentless. And they saw results. In the next half decade, Abraham Lincoln was elected, slavery was abolished, and the visionary Reconstruction began in the South.

Like our predecessors, we will demand the future we need, not the future our political leaders think they can negotiate for. Our generation will fight for true abolition and complete the unfinished work of the Reconstruction.

And when these hundred days are done, on election day November 3rd, any politician who isn’t with us will be replaced.