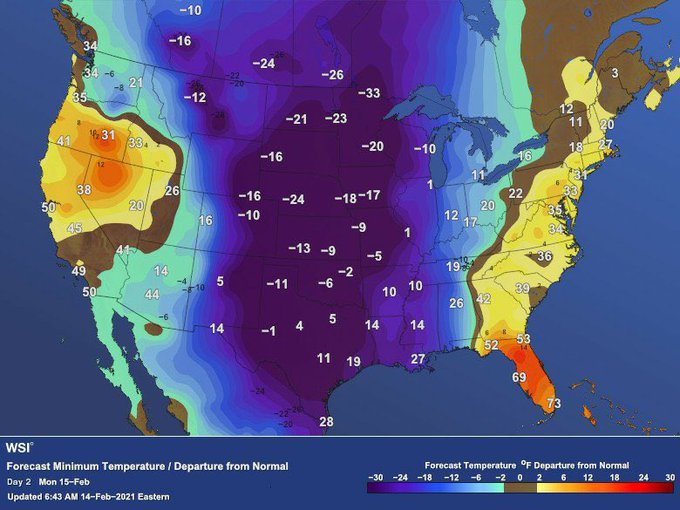 As of last night, the climate crisis induced a polar vortex that killed 29 people so far, and has left around 5 million homes and 13 million people without power in the midst of a record cold winter. Today, Sunrise Movement’s Digital Director, Paris Moran of San Antonio, Texas, released the following statement:

“On Sunday, my household lost power. Our food went bad. We don’t have a consistent water flow. My family and I are sustaining on one meal a day as food deserts worsen. And each moment without power, my heart breaks as my parents suffer not only from the storm, but because they can’t use the medical devices they rely on to ease them of pain. We are hungry, thirsty, cold, and hurting. And we are not alone in this.

“Millions of Texans are suffering without power trying to find food, clean water and a heated place to stay. News outlets have shared stories telling people how to avoid carbon monoxide poisoning as they try to stay warm in a record cold winter. We are truly fighting for our survival. And how does Governor Abbot respond? Instead of working to address this crisis, he gets on Fox News and lies about the Green New Deal, scapegoating policies that have yet to be enacted instead of taking responsibility for his own failures.

“Governor Abbot has failed to protect Texans from the climate crisis, promoting a deadly fossil fuel economy and selling us out alongside other leaders for privatization and destructive deregulation.  He failed to ensure we were prepared for an extreme weather event like this, and now he’s failing to protect us in our moment of need. It is time for him to resign.

“Abbott and the Republican Party have proven that they will not govern under any circumstance, no matter how many lives are at risk. Whether it’s utility blackouts, the climate crisis, or coronavirus, it’s easier to find misinformation here in Texas than actual updates from our government, utility companies, and other institutions.

“In the wake of their failed leadership in times of crisis, we the people are filling the void to take care of each other. We are the ones supporting each other through the crisis while the government is on standby. We are the ones raising money for hotel stays, and cooking and distributing food to those in need. Now, we must start asking what our government can do for us. We cannot afford for this to happen again. As disaster after disaster strikes, bold action must be taken to not only prevent this destruction, but ensure communities like mine, especially communities of color who often face the brunt of the catastrophes, are equipped and empowered to handle them.

“But it doesn’t have to be this way. We deserve a government that addresses our basic needs and protects all of us in moments of crisis. Despite the lies you’ll hear from Governor Abbot on Fox News, that’s truly what the Green New Deal is all about. Now is the moment to invest in resilient infrastructure, ensure a social safety net that protects all of us, and halt the climate crisis once and for all. We must come together and rebuild an era of prosperity through the Decade of The Green New Deal.”

In response to this devastating storm, the Sunrise Movement is working with its local Texas hubs to provide mutual aid to families in need on the ground, and has raised tens of thousands of dollars to support these efforts to make up for the government’s failures. The Sunrise Movement has also been one of the strongest advocates of a Green New Deal in an effort to mobilize every aspect of American society to 100% clean and renewable energy over the next decade, guarantee a living-wage job for anyone who needs one, and provide a just transition for both workers and frontline communities in an effort to combat the climate crisis.