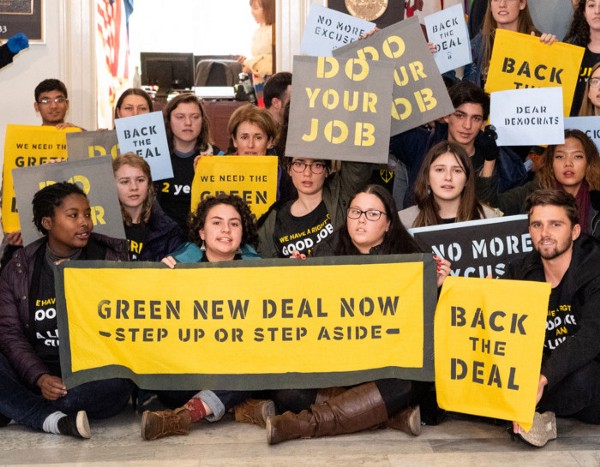 The United Nations Intergovernmental Panel on Climate Change says we have to reduce emissions globally 40–60% by 2030 in order to avoid the worst impacts of climate change. In order to achieve that, the United States must do much more, much faster — both to take responsibility for our fair share of emissions in a way that compels other countries (particularly China, India, Brazil, Russia, and the European Union) to act, as well as to provide an economic and innovation engine that can accelerate emissions reductions around the world.

Independent analyses show that to achieve global reductions in line with the UN report, the United States should contribute to emissions reductions of~100–275% below our baseline by 2030. That is why the Green New Deal sets an ambitious but necessary goal for a 10-year mobilization aiming to achieve greenhouse gas neutrality here in the United States.

We don’t know if this goal is possible, but we know it’s the bare minimum of what we should be trying to achieve in order to preserve a livable future. Ideally, we should be going beyond this goal by supporting other countries to reduce and drawdown greenhouse gases, and eventually going greenhouse gas negative as well. The point is, we need to get our emissions down as fast as possible, and we should be doing everything in our nation’s power to achieve that goal.

When FDR said we would build a historic air-force of 185,000 planes to defeat the Nazis, we barely had an airlines industry and were producing only about 3,000 planes a year. We didn’t know if we could do it, but we knew we had to try. By the end of WWII, we had produced over 324,000 military aircraft (in less than 5 years). It was the same situation when JFK said we would send a man to the moon in 10 years; we didn’t know if it was possible, but we knew it was worth trying.

We don’t know if we’ll be able to zero out emissions in every sector of society in the next decade (e.g. this will be easier to achieve in the electrical sector than it will be in transportation or heavy industry), but we’re saying we should throw the full weight of our nation at trying to figure it out and to go as far as we can. And we should be investing in drawing down emissions through proven methods like sustainable agriculture, land practices, forestry, ecosystem preservation and restoration, and more. If we do all of this, we’ll create unprecedented economic and environmental prosperity, including millions of good jobs in new and existing industries.

The Green New Deal is daring America to dream again, and calling on every sector of society to come together to do what needs to be done.