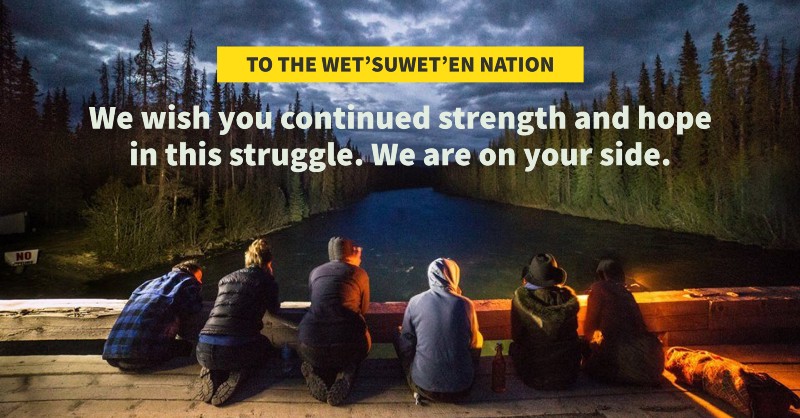 Sunrise Movement expresses solidarity with the people of the Wet’suwet’en Nation as they and their Hereditary Chiefs affirm their right to protect their ancestral lands, most recently against the Coastal Gaslink (CGL) Pipeline project.

Fossil fuel executives have proven time and again that they prioritize money over human life and the planet as a whole. This time, they used Canadian government as muscle, prompting the unlawful invasion of unceded ancestral territories by the Royal Canadian Mounted Police and violence against peaceful land protectors.

We condemn the actions of the Canadian government, which should honor its recognition of Wet’suwet’en sovereignty over their territories and not the greed of billionaire CEOs. Under ‘Anuc niwh’it’en (Wet’suwet’en law) all five clans of the Wet’suwet’en have unanimously opposed all pipeline proposals and have not provided free, prior, and informed consent to Coastal Gaslink/TransCanada to do work on Wet’suwet’en lands. By ignoring this directive, the Canadian administration reveals its stated desire for reconciliation with Indigenous peoples to be hollow lies.

Denying Indigenous peoples access to their own territories and resources is an act of genocide. This continued colonial violence cannot be allowed to go on. As we organize for a Green New Deal — grounded in principles of the Red Deal — we recognize the many years of care and labor Indigenous Nations have put into leading the fight for climate justice while experiencing the impacts of the crisis first and worst.

Learn more about supporting the Wet’suwet’en Nation by visiting their website, where you can find more information about the brutal assault of their camps and a supporter toolkit with resources for volunteering and speaking out against this injustice.

To the Wet’suwet’en Nation: We wish you continued strength and hope in this struggle. We are on your side.