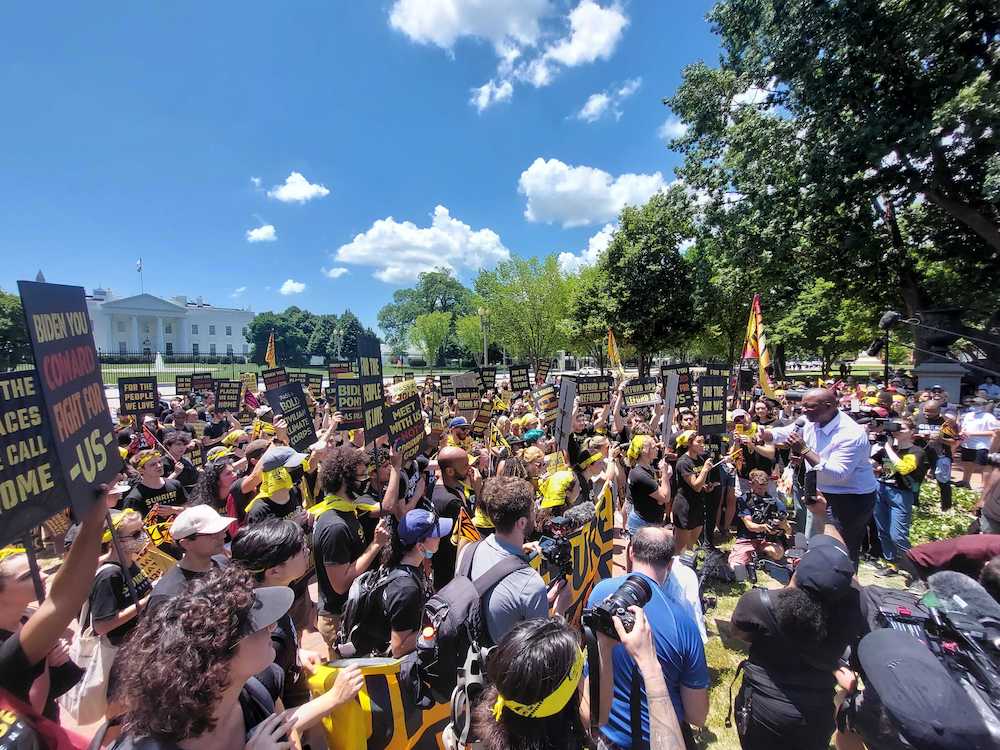 Right now, 500 young people are enroute to barricade all 10 entrances to the White House to demand you, President Joe Biden, act on your elected mandate of climate justice and only pass an American Jobs Plan that includes necessarily ambitious solutions to the crisis. I am one of them.

I’m arriving in Washington D.C. after supporting seven young women on their 266-mile march from Paradise, to rallies outside the homes of Senator Feinstein and Speaker Pelosi. We sit outside the White House doors shoulder-to-shoulder with our friends who just finished their 400-mile march from New Orleans to Houston, our friends who spent the night in jail after refusing to leave a sit-in on Senator Cruz’s lawn. Our other friends arrived on foot for their last mile of 105 across the state of Pennsylvania.

We made some calls–and 500 people from every corner of the Sunrise Movement answered. We march together down Pennsylvania avenue, and sit outside your White House doors to make unquestionably clear: the American Jobs Plan sitting on your desk will include bold and transformative action against the climate crisis or your plan will not pass at all. I’m here today because your plan, after rounds of performative concessions to the Republican minority, worsens the crisis of climate and leaves the millions of Americans that elected you on the promise of good-paying jobs without secure employment or a liveable wage.

Concessions made to people that did not elect you. We elected you–the youth vote carried the election. If you are going to negotiate on our lives and livability of our planet, negotiate with us.

We demand you step up to your position as the highest elected leader in a party powerful with a federal majority, and act on your elected mandate. It starts with the American Jobs Plan: good jobs are economic justice, and Civilian Climate Corps jobs are climate justice.

Several Congressional members of your own party have drawn a line, stand on our side, and say: no climate, no deal.

500 of us sit at every entrance to the White House because this moment is bigger than the Congressional tug-of-war over the final version of the American Jobs Plan. At this moment, I and hundreds of other young people from across the climate movement are here to demand climate justice, and hold you accountable for your failure to uphold the basic pillars of climate justice.

Real climate justice is ambitious and transformative policy in the American Jobs plan–but it’s also shutting down the Willow Creek Project in Alaska, and Line 3 in Northern Minnesota. Climate justice is ending all new fossil fuel projects in the United States, and ending our support for the cause of the crisis in projects abroad. Climate justice is spending this decade ensuring clean air and drinkable water, safe homes and good jobs, across racial, class, and generational lines.

In my 266-mile march across the state of California, I witnessed the severity of climate injustice. You said, “climate change is an existential threat” yes–and it’s right now. The backdrop of our march was charred black after years of record fires, and browned and barren after years of record droughts. The route was dotted with towns abandoned during water shortage. Streets were lined with homes burned and boarded up, with no plan to rebuild because when Cal Fire ordered evacuation, all the jobs fled too.

Along the march, I stopped to talk to lifelong Californians and the story was the same– communities and jobs taken by the crisis. I told them about the solution we marched for: good jobs for clean air, water, and energy and received a resounding consensus of support on the left and the right, in the young and the old. Their story is my story–I’ve lost the places I love to climate disaster, and fear for the future of my friends and family who call themselves Californians too.

It’s why Sunrise California, the Gulf South, and Pennsylvania marched hundreds of miles. It’s why I and hundreds of other young people sit-outside every entrance to the White House today: we’ve spent our entire lifetimes watching the climate crisis take our communities and threaten our futures even more unliveable. There are no excuses for weak action against the crisis, and there is no compromise worth our lives.

Compromises and concessions made to people that did not elect you. We elected you–the youth vote carried the election. If you are going to negotiate on our lives and livability of our planet, negotiate with us.

So we will sit here until you commit to the side of climate justice, commit to an American Jobs Plan written with bold ambition against the climate crisis including a Civilian Climate Corps, and pass it through reconciliation immediately–or you will not pass a bill at all.

Joe, the climate crisis is here and your current compromised plan fails to protect this country from devastating disasters and dire economic consequences. Failure will be your Presidential legacy if you pass anything less than transformative climate justice in the American Jobs Plan.