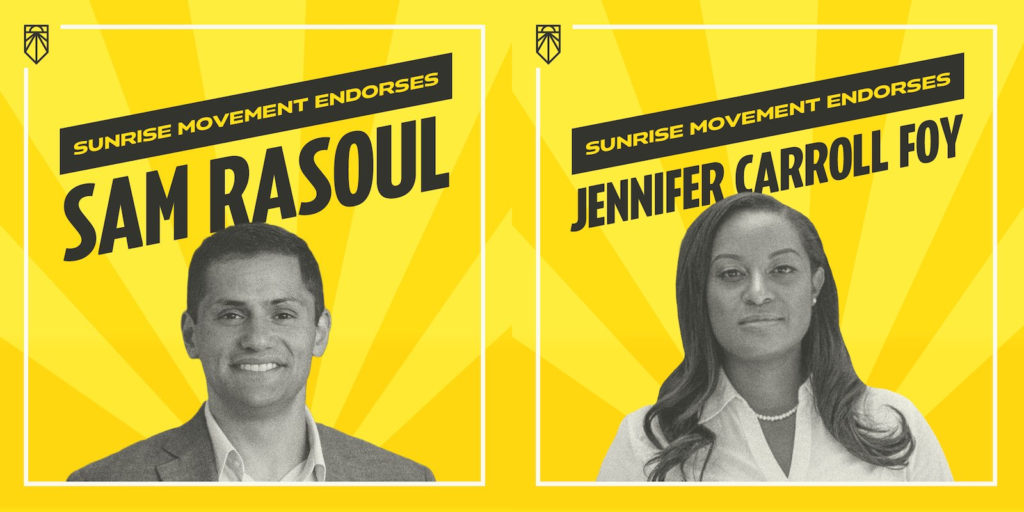 “Sunrise is proud to stand with Green New Deal champions Jennifer Carroll Foy and Sam Rasoul for Governor and Lieutenant Governor of Virginia,” said Evan Weber, Political Director of the Sunrise Movement. “At a time when our country spirals through a climate crisis exacerbated by a global pandemic, Virginians need leaders like Jennifer Carroll Foy and Sam Rasoul, who are committed to investing in green energy production, bringing diverse, high paying jobs to every corner of the Commonwealth and passing a Virginia Green New Deal. Jennifer Carroll Foy and Sam Rasoul are the only progressive leaders who can do this and ensure Virginians will not be represented by wealthy politicians like Terry McAuliffe, who don’t hold the same climate commitment and instead line their pocketbooks with money from environmentally toxic special interests.”

In response to Sunrise’s endorsement, Jennifer Carroll Foy and Sam Rasoul responded reinforcing their commitment to combat climate change, and commended the Sunrise Movement for their work.

“As a former foster mom and mother of three year-old twins, I know fighting for environmental justice is one of the most important things we can do for our children’s and our planet’s futures. That’s why when I learned that lead and arsenic from a Dominion plant was polluting water in my district, I immediately took them to task and worked to pass legislation to clean up coal ash ponds across our Commonwealth,” said gubernatorial candidate, Jennifer Carroll Foy. “I have been so inspired by the hard work the Sunrise Movement has done to champion the fight for the clean, just, and equitable future Virginians deserve, and will stand shoulder to shoulder as Governor with all Virginians committed to ensuring we do all that we can to protect our planet for our kids and future generations to come.”

“Every year here in Virginia we have seen the climate crisis with our own eyes: the flooding, the heat waves and the rising sea levels on our coast keep getting worse. But I am filled with hope because of the energy that the Sunrise Movement has created for intersectional justice in Virginia and around the country,” said Sam Rasoul. “Since I was first elected in 2014, I have stood with the growing movement of concerned residents in Virginia who defeated the Atlantic Coast Pipeline that threatened our water, our health and our planet, and who will soon defeat the Mountain Valley Pipeline, too. And since 2018 I have seen the Green New Deal grow from a righteous idea into a national movement that connects climate justice to racial justice, and economic justice, and health care justice. Along with Sunrise, we are going to ensure this is the decade of the Green New Deal in Virginia—the decade we avert climate catastrophe, create many thousands of good-paying jobs in clean infrastructure, and uplift impacted communities in every part of our Commonwealth.”

This comes as Sunrise Movement has cemented itself as a strong electoral player. In 2020, Sunrise contacted over 6.5 million voters in the primaries and general election creating the largest youth turnout in history. This led to not only the victory of Biden and the Senators in Georgia, but the victory of Green New Deal leaders across the country, including Senator Ed Markey, Reps. Cori Bush and Jamaal Bowman, and more. Sunrise Movement expects to contribute to both campaigns by bringing attention to these important elections in a year that will surely be a bellwether for 2022 through social media pushes, fundraising, and coordinating its network of organizers in Virginia and around the country.