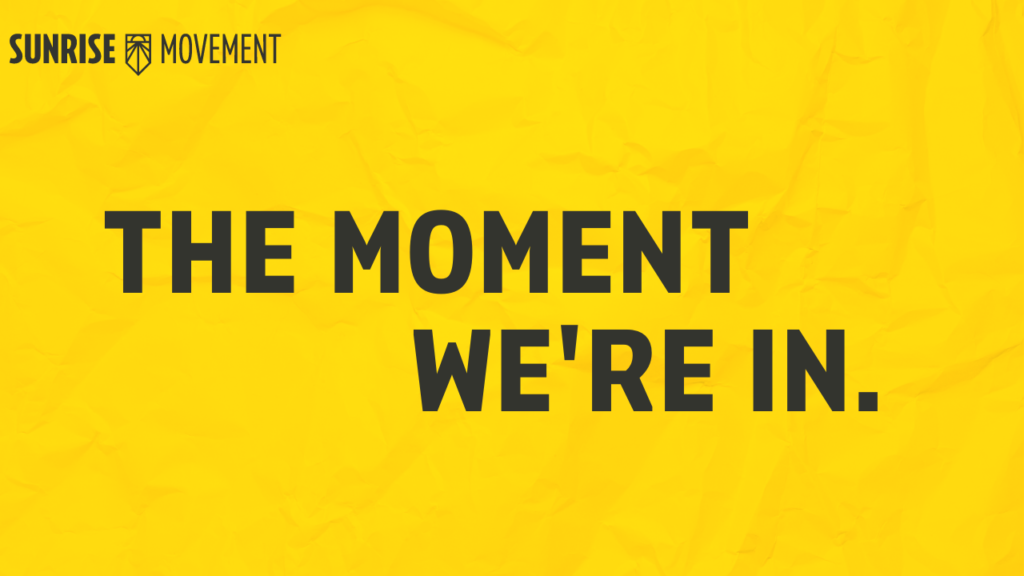 The moment we’re in

It’s brutal out here. Every day we wake up to another horrifying headline: another mass shooting, a head of state jonesing for war, a new Supreme Court ruling striking down the will of the public, or yet another flood or fire or hurricane fueled by a warming planet. And we see the political system in theory supposed to be tackling these problems teetering on the edge of collapse. Democrats in DC are spending more time pointing fingers at the other side or telling us to calm down and vote than putting forward the bold solutions we need. Some days, I feel like it’s just too much and just want to go back to bed.

The fact that we’re here is no accident. The world we’re living in right now was dreamed up by rich, white men decades ago. They bought out politicians, partnered with white supremacists and oligarchs, divided people by race, religion and geography, and carefully executed a decades-long campaign to get millions of people to buy into their vision. Now their dream is our daily nightmare.

Now, what our generation does will determine if we keep living in the wildest dreams of the rich and powerful, or if we turn their world on its head.

Looking back at where we’ve been

In the last few years, we’ve seen the potential for our generation to take over. Workers are walking off the job to demand fair treatment and organizing their co-workers into unions. We’ve fueled the biggest waves of protest in American history: the uprisings in 2020, the climate strikes in 2019, and March for Our Lives in 2017 and 2018. We defeated Donald Trump and put Democrats back in control of Congress for the first time in a decade, and we elected powerful leaders like AOC and Cori Bush and Summer Lee to office.

We had some wins along the way and many excruciating moments where we got so, so close, but didn’t win. Cities increased funding for the police, Joe Manchin blocked Joe Biden’s climate agenda. If you’re like me, in those moments you probably felt demoralized and powerless. We left it all out on the field: rallying in cities around the country, walking hundreds of miles, and some going on hunger strike. But Joe Manchin didn’t budge.

For me, when I’ve felt discouraged, I’ve looked back at where our movement has been.  I think back to how different things were in 2017 when I joined Sunrise — there were no AOCs or Jamaal Bowmans, Donald Trump looked poised to successfully take away healthcare from millions of people, and the youth climate movement was tiny.

In 2017, the first frontloading team set two ambitious goals for the next four years: 1.) Make climate priority 2.) Get the public to agree on the GND as the solution. In the early days, many people said this kind of ambition was naive, but because tens of thousands of us committed to organizing, we succeeded in pretty major ways.

In 2016, voters ranked climate change as the 18th most important issue to them. Now even amidst a war, a pandemic, gun violence, and inflation, climate change is consistently in the top 5 issues.

5 years ago, the dominant policy that even people like Bernie Sanders ran on was a carbon tax, the fossil fuel industry’s preferred climate ‘solution’.  We introduced the Green New Deal to millions of people and put economic and racial justice at the center of the conversation about climate action. We still have work to do building deep support for the vision, especially in the face of attacks from Fox News and the Democratic establishment, but we completely transformed the conversation about climate change.

The initial frontloading team also set a third goal, which they knew would be a longer fight beyond the 4-year plan: Start winning the Green New Deal at every level of government. We achieved some wins, especially at the local level, but we fell short in many other places and at the federal level in 2021. Building the local power needed to achieve this goal is the mission we must take on in the coming years.

Sunrise 2.0’s goal is to set our movement up to effectively build people power, shift public opinion, put everyday people into power, and achieve local wins that build momentum for national change. If we do that we can build the kind of power that can’t be held back by the whims of rich men in DC.

The Frontloading Team identified 4 major interventions required to get us there:

The Sunrise 2.0 DNA is all built around helping us achieve these four big shifts that the frontloading team believes will help us build a powerful movement that can pick up where Sunrise 1.0 left off by bringing the Green New Deal to the heart of our communities and starting to win change in line with the Green New Deal.

We’re not going to be able to do this overnight. There are going to be moments again where we’re overwhelmed and where we feel powerless. There will be tragedies that we don’t have the words for. This strategy isn’t going to have all the answers, but I think in a time as tumultuous as the present, it would be arrogant for us to think any strategy we develop could. But I deeply believe that if we commit to this path of organizing and multiracial cross-class base building, we can navigate these rough times together and transform our communities and eventually our whole country.