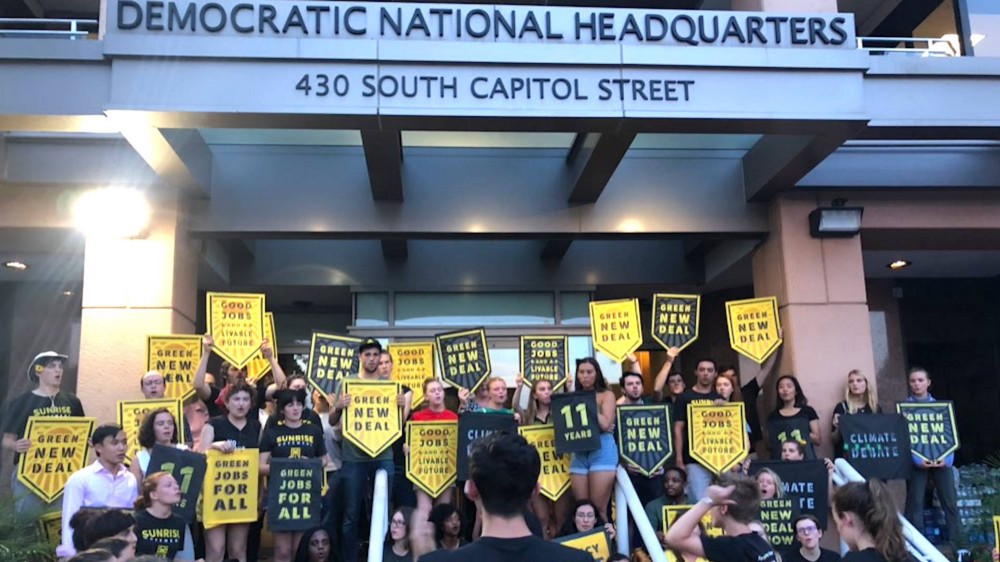 The fight of our lives

It’s been a big week with some huge wins and close losses. I’ve been sitting in my feelings a lot, and spending time with other leaders in Sunrise Movement asking what Tuesday’s election results mean and where we go from here. I wanted to share some of those thoughts with you, and call you into action. This moment, right now, is the fight of our lives.

What happened on Tuesday

Topline: The media and Democratic establishment closed ranks and delivered a narrow win for Biden on Super Tuesday. In Texas, we had a big win with Mike Siegel coming in first in his House of Representatives primary, but also a tough loss with Jessica Cisneros narrowly losing to an entrenched incumbent backed by mountains of Koch money.

We have known all along that 2020 is going to be a pivotal year for our generation. Tuesday underscored how much this political circus could go either way — and it’s clear everything can change overnight. There is so much at stake. We have an opportunity to deliver an undeniable mandate for a Green New Deal to the next administration.

This is anyone’s race.

It’s important to stay focused on the facts. The media is pushing a story that Biden’s victory is all-encompassing. In reality, he and Bernie are only ~91 delegates apart. To clinch the nomination, Biden needs to win 53% of remaining delegates. Bernie needs 56%. And each needs 1,991 delegates total. It’s possible that neither of them will end up with a majority — and this election will be decided at the convention in July.

I’ll be honest, our movement’s successes making the climate crisis and the Green New Deal a top political priority this past year has left me sometimes taking victory for granted. And after we helped Bernie win Iowa, New Hampshire, and Nevada…I started to take this election for granted, too. Tuesday was a rude reminder of the Democratic establishment’s power, and the media’s power to shape a narrative around who is and isn’t electable. Going forward, I’m not taking anything for granted and the stakes are even more clear — we need to build a political revolution not just to make the Green New Deal victorious in this election, but to upend the balance of power in this country for a generation.

Our mission this year is to elect a President and Congress with an undeniable mandate to make the Green New Deal a day-one priority. Over the coming weeks, the best way to do that is to:

1. Win primary elections for Bernie and other Green New Deal champions running for Congress
2. Continue to push Joe Biden to prioritize the climate crisis, and adopt the policies and values in our vision of the Green New Deal.
3. Continue to build our movement in every corner of the country — so that no matter who the next President or Congress is, our power is undeniable.

We need to be very clear: this movement is bigger than any one candidate or election. We’re going to fight like hell for Bernie Sanders, but the tough reality is that this is a very close primary and it could go either way.

The more we do to elect Bernie, and the more we do to push Biden on our issues, the stronger position our movement for a Green New Deal will be in as we head towards the general election — no matter who the nominee is.

The next few weeks and months are critical. Everything we do or don’t do will matter. If you’re a young person in America terrified about what the climate crisis means for your future, you have so much power to shape the outcome of this election. Here’s how:

We need to lean into our strengths

Since we started, Sunrise Movement has been strongest when we’ve used moral protest and strategic disruption to inject ourselves into the national story and transform the terms of the debate. In the horserace of this election cycle, we’ve sometimes lost sight of how we can have the greatest impact.

Put the Green New Deal at the center of the 2020 elections.

No matter the nominee, we need to give the next President a mandate to enact the Green New Deal, and elect more champions to Congress. We should think of every day from now until the Democratic National Convention in July as a campaign to make the Green New Deal center to the 2020 elections and a core pillar of the Democratic Party. We can throw our weight behind champions running for Congress, use moral protest around Earth Day to make sure elected officials are feeling the heat, and we’re beginning conversations with Sunrise hubs in the Midwest about the potential for a mobilization at the Democratic National Convention this July to demand the Green New Deal is part of the 2020 Democratic Platform.

Push Biden and his climate plan in the spotlight.

On Super Tuesday, Biden won 34% of voters who said that climate change was the issue that mattered most to them — about the same number of those voters went to Bernie. We know that Bernie Sanders is leaps and bounds ahead of Joe Biden in prioritizing the climate crisis and in the seriousness of his Green New Deal plans to stop it. Since climate is such a big issue in this election, that means that if climate voters shift to Bernie, it could sway the election.

Over the next few weeks, we need to be everywhere Biden is, asking him hard questions to push him on his record and putting those interactions online to highlight for voters why Bernie is the best candidate to energize our generation to defeat Trump, tackle the climate crisis, and create millions of good jobs with a Green New Deal. In doing so, we can also push Biden to be a stronger candidate more capable of mobilizing young and climate-concerned voters—should he be the Democratic nominee against Trump.

Make young people feel the urgency and stakes of this election.

It’s become clear—there’s a generational divide in the Democratic Party. Young people are voting for Bernie by historic margins — the problem is that older voters are increasing their numbers, too. But, youth turnout so far in the Presidential primary has been mixed. We need to show young people—our friends, our classmates, our siblings, our cousins, our co-workers—what is at stake in this election. If we can get more young people to turn out this Spring, and achieve historic youth voter turnout in November, it can sway the election and put Bernie Sanders in the White House.

But there are a lot of barriers to young people voting. Young people are incredibly busy and as we saw last week, many of us face incredibly long lines while we wait to vote or challenges voting at all because efforts led by the GOP to disenfranchise young people, working class people, and people of color. And so many in our generation feel so abandoned by the political establishment that they don’t see the point in voting at all.

Our task in this Primary and into the General election is to help young people in every corner of the country see this year for what it is — the fight of our lives. Our generation needs to feel the stakes of this election for our communities, for our future, and for ourselves in our bones. We need to embody what Dr. King described as “the fierce urgency of now.”

I’ll be honest, we don’t totally know how we do this. We know talking to young voters on the phones, at the doors, and on campus makes a huge difference — and we need to keep that up. But we need to think outside the box about what we can do that goes beyond convincing one voter at a time and think about how we can make 2020 a generational uprising for a Green New Deal.

All of us need to be leaning into Sunrise Principle 3 — taking initiative and experimenting with what we can all do to make our generation feel the full stakes of this election. Maybe that’s doing a teach-in at your school, maybe it’s hosting a get out the vote party, maybe it’s a social media campaign, maybe it’s canvassing on Tinder, maybe it’s moral protest targeting local media for not talking about the stakes of the climate crisis in our elections.

Above all else: talk to your friends, family, and people you know. Tell them what this election means to you. Get them as freaked out as you are. And move together into action.

Here’s what you can do now:

This Sunday March 8th at 5pm Eastern, we’re holding a mass call to take stock together and lay out in depth where we go next.

We’ll share how you can phone-bank and knock doors for Bernie and Green New Deal champions over the coming weeks, push Biden on his shortcomings on climate and put them in the spotlight, and build the movement to make sure the Green New Deal is at the center of the 2020 elections and beyond.

The next few weeks are going to be a whirlwind. The pundits on TV are going to be changing their take every other day. We’re going to keep earning wins and facing some tough losses. It’s going to be easy to feel disoriented by it all and not be clear if we’re moving in the right direction. So, as we embark on this next phase of our work together, I’m keeping my eyes on how we’re doing towards our bigger goals. Are more and more young people feeling like this is the fight of our lives, and choosing to take action with us?

When the answer is yes, we’re succeeding in doing something bigger than any one election night — we’re on our way to winning the battle to bring about a new era to this country. One where no matter the color of your skin or how much money you have or where you’re from you have basic rights to clean air and water, a safe home, a stable climate, a good job, and the quality healthcare you need to not just survive, but to thrive.

The last few months have proven to us that this vision is within reach and it’s the direction our generation will take this country. What’s up to us to decide is whether or not we claim our power over the next 8 months and reshape our politics at the speed these crises demand.