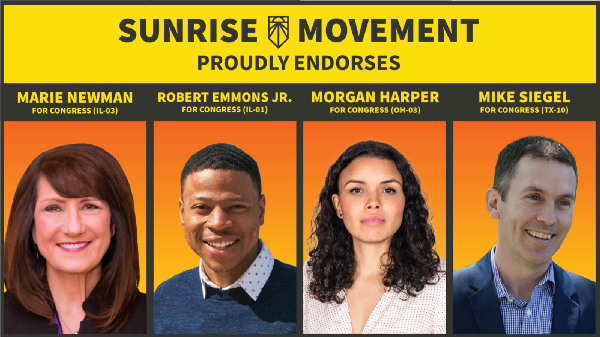 Washington, DC — Today, Sunrise Movement announced a cluster of Congressional endorsements for Democratic candidates running in early 2020 March primaries. The endorsements span a range of political newcomers running on the Green New Deal, including Robert Emmons Jr. (IL-01) and Marie Newman (IL-03) of Chicago, IL, Morgan Harper (OH-03) of Columbus, OH, and Mike Siegel (TX-10), whose district spans between Austin and Houston, TX. With the exception of Siegel — who is running to oust a Republican representative in a purple district — the candidates plan to unseat Democratic incumbents in blue districts. Though this announcement signifies the first bracket of Congressional endorsements, it comes after the separate endorsements of primary challenger, Democrat Jessica Cisneros of Texas’ 28th district, and Republican challenger, Democrat Audrey Denney of California’s 1st district.

“The scientists are telling us that 2020 is our last opportunity to elect climate leaders that can immediately enact bold, transformational action over the course of the next decade to save our planet. Meanwhile, establishment politicians of both parties are complacent. So I think that’s why we’re seeing this wave of candidates joining the urgent calls from young people in launching campaigns across the country boldly championing the Green New Deal. These candidates, such as the four we’re endorsing today, come from communities tired of political corruption and neglect, and vigilantly attuned to the linked climate and economic crises we are facing as a nation,” remarked Evan Weber, Political Director of Sunrise Movement. “These insurgent campaigns are a clear indicator of the appetite for an entire new way of doing things, and a restructuring of our society under a populist agenda that guarantees things like living wage jobs, affordable and safe housing, universal clean air and water, and Medicare for All — all policies which we see bundled into the Green New Deal framework.”

Siegel, a civil rights lawyer and former public school teacher, and Newman, business leader and progressive advocate, enter the race with some campaign experience, having run competitive races in 2018 against Democrat Dan Lipinkski and Republican Mike McCaul. The two now see the 2020 elections as a critical political moment to break through the field by championing popular platforms like the Green New Deal.

“In 2018, we built a broad coalition of unions, environmentalists, and progressives across urban and rural communities, in a district that has been red for a long time,” Mike Siegel, TX-10 explained. “We nearly beat McCaul. In 2020, energy from groups like Sunrise Movement and inspiring agendas like the Green New Deal are going to take us over the finish line.”

““I am proud to have the support of the Sunrise Movement and I am dedicated to joining them in the mission of advocating for and innovating and organizing toward 100% clean and renewable energy by 2030. Solving the climate crisis and expanding our economy are not mutually exclusive pursuits,” Marie Newman, IL-03 remarked. “We have the opportunity, particularly in districts like mine that are major transportation hubs, but across the entire country, to embrace new and innovative technologies, to build a green economy, to create good paying union jobs, and to save our planet from a climate crisis. Lipinski and his dwindling circle of fossil-fuel funded Democrats are a threat to the Democratic Party truly being a party of the people.”

Harper, a 36 community advocate and former staffer at the Consumer Financial Protection Bureau, and Emmons Jr., a 27 year old community organizer, launched into politics after coming of age amidst the rise of the climate crisis, polarized racial tensions, and economic inequality. They began to realize their own political potential after witnessing the uprising of political newcomers, such as Green New Deal champion Alexandria Ocasio-Cortez. The two are running against establishment Democrats Joyce Beatty, 69 and Bobby Rush, 73 who both oppose the Green New Deal and have received hundreds of thousands of dollars from utilities and fossil fuel interests.

“The Green New Deal is the solution that the 1st District of Illinois needs to combat the climate crisis, reinvigorate our local economy, and curb the cycle of violence that plagues our communities,” Robert Emmons Jr., IL-01 said. “The Sunrise Movement understands that jobs, healthcare, clean water, clean air, and clean soil are essential to gun violence prevention and I am beyond grateful for their support.”

“Every day that Congress fails to address climate change with the same magnitude and urgency as the climate crisis we face, is a failure of leadership. Plain and simple,” said Morgan Harper, OH-03. “The Sunrise Movement has led with the forcefulness to deal with our climate crisis and it’s an honor to have their endorsement. We believe that our future exists without fossil fuels and with a green new deal to transform our economy for a more sustainable future.”