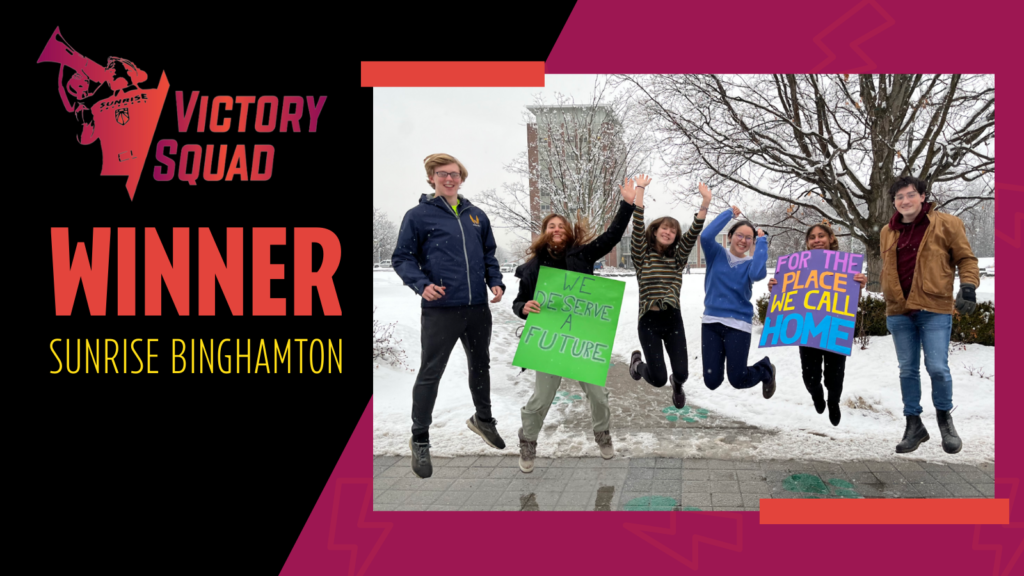 The Victory Squad came together early this year to send Jessica Cisneros to her upcoming runoff on May 24th against “Big Oil’s Favorite Democrat” Henry Cuellar.

Collectively the Victory Squad Cup sent over 114,000 texts in February to voters in Texas’ 28th district. And, Victory Squad members filled 40 phone bank shifts, making thousands of calls. All these conversations were a part of a massive effort from across the Sunrise Movement that ultimately amounted to over nearly a million voter contacts.

The Victory Squad is a community of young people across the country and across the Sunrise Movement. They channel their power into electing Green New Deal champions. “In short, the more voters we contact…the more likely we are to win!”

In February, the Victory Squad was made up of 11 teams, each with 4 to 10 members. Amber of the Moment Makers said, “Having this smaller group while helping out with this campaign remotely created a connection and community I really enjoyed.” Each small team formed their own identity with a name and emoji.

In total, 61 people participated. Each person attended trainings, participated in fun community events like the No Talent, Talent Show and Meme of the Week competition, and of course talked to voters by phone call and text to earn points for their team. Samantha of Sunrise Binghamton said, “ I especially relished the talent shows.” At the No Talent, Talent Show, Victory Squad members performed poetry, played the piano, danced, and much more!

After the March 1st primary date, Victory Squad members gathered for a closing banquet. Congressman Jamaal Bowman joined the closing banquet to celebrate and appreciate each member of Sunrise Binghamton by name!

To get in on the fun, you can join the next round of the Victory Squad Cup by signing up at smvmt.org/victory!