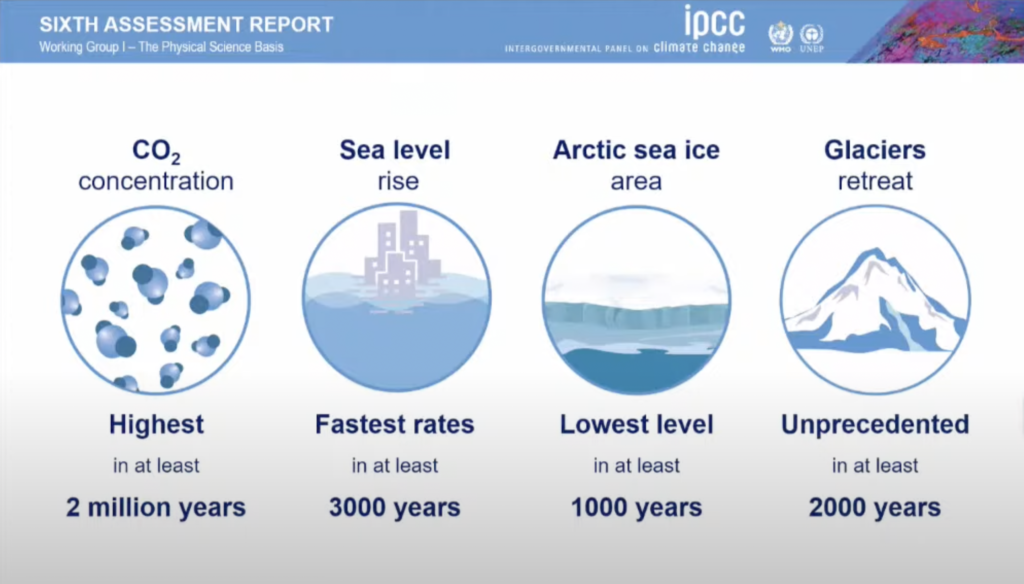 Today the most respected climate scientists from theIntergovernmental Panel on Climate Change (IPCC) told us we are out of time. In their sixth and latest report, they laid out the stark realities of our global climate future. We are locked into rising sea levels for the next new hundred years and rising temperatures until we reduce our emissions to zero. We will be beyond the reach of a livable habitable earth in the next two decades without immediate, rapid, and large-scale reductions in greenhouse gases.

Do politicians know what it’s like to be a young person alive today? To have to read these reports and articles about the potential end of civilization as we know it in our lifetimes, and be expected to just go to school, or work, and act like everything is normal? Like everything is okay? Well, it’s not okay. And we’re not going to act like it.

We don’t even need a report to tell us how bad things are. We’re already living it. Fires are burning forests the size of US states and skies fill with haze and smoke from thousands of miles away. Buildings are collapsing into the sea. Infrastructure is literally melting. Power is getting shut off and people are dying by the hundreds from heatwaves. That’s all from the last few months alone. Meanwhile, men in suits are debating whether we should even act at all, and the President of the United States is letting climate-denying Republicans scale back his already insufficient climate pledges — putting the pursuit of “bipartisanship” over the existential future of our civilization.

This latest IPCC report must be a wake up call that half measures are not nearly enough to end the climate crisis. Even if we act now with the boldest possible action, there is still irreversible damage locked in from decades of fossil fuel use: sea levels will continue to rise, ice sheets will melt rapidly, and many coastal cities will cease to exist due to rising sea levels. Let’s be clear: this was avoidable. These severe, nearly irreversible impacts are due to inaction from our politicians, many of them bought by oil and gas executives protecting their pocketbooks at the expense of everyone else. It is because of their failure to act that the IPCC warns the places we love and call home will one day cease to exist.

Right now, we have the chance to pass historic legislation that could begin the decade of the Green New Deal. This legislation must include: a fully-funded Civilian Climate Corps, significant investments towards public housing, schools, transit, and renewable energy, strengthened unions and worker protections, an end to fossil fuel subsidies, and at least 40% of investments to frontline communities. The IPCC report is clear – the stakes are high and we’re running out of time. Anything less than delivering the full scope of climate action is ignoring science and a failure for our generation.

And yet, the worst thing we as individuals can do right now is give into despair. To all the young people out there feeling scared, feeling numb, feeling angry: Don’t give in, or they win. Now is the time to get organized. A better world is possible and it is within reach. No one is coming to save us but ourselves. Talk to your neighbors. Gather your friends. Join our movement. The time for disruption is now.

Join Sunrise in pressuring politicians to take this moment seriously and push our climate priorities through reconciliation. We’re targeting our in-district reps, as well as these top 5 targets:

1. Senator Joe Manchin (D-WV), Chair of Energy and Natural Resources Committee – we’ll be pushing him in particular to commit to #NoGas in a Clean Energy Standard.

2. Senator Sherrod Brown (D-OH), Chair of the Banking, Housing, and Urban Affairs Committee – we’re pushing him to cosponsor the BUILD GREEN Infrastructure and Jobs Act and the Green New Deal for Public Housing.

3. Representative Bobby Scott (VA-03), Chair of the Education and Labor Committee – we’re pushing him to cosponsor the Civilian Climate Corps for Jobs and Justice Act, and Green New Deal for Public Schools.

Bobby Scott is of particular importance because of his say in how much can go towards a CCC.

4. Representative Frank Pallone (NJ-06), Chair of the Energy and Commerce Committee – we’re pushing him to commit to #NoGas in a Clean Energy Standard.