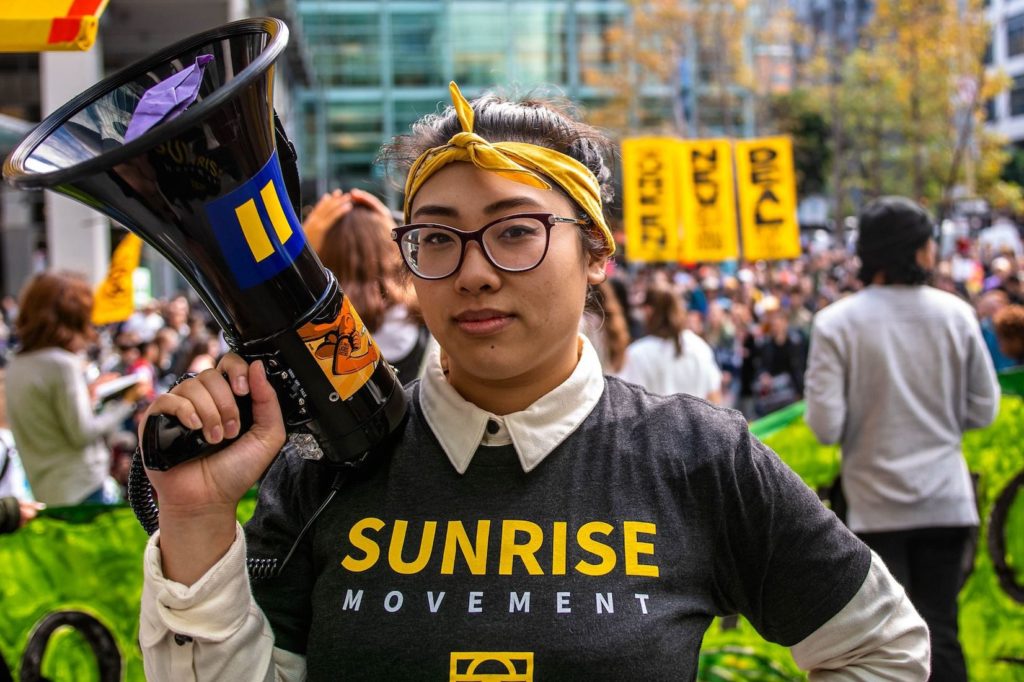 Four months ago, when Bernie Sanders suspended his campaign for President, it felt like the world came crashing down on us. Since then, we’ve faced a global pandemic and marched in the streets to scream Black Lives Matter. The times feel revolutionary.

That’s why right now, after we came SO CLOSE in the primary, the idea of voting for a President, Senator, or Congressperson without the political record and moral integrity to fiercely take on this moment feels… demoralizing, to say the least.

Our vision of the future is ambitious and abolitionist. Our calls to defund the police, our demands for immigration justice and our solidarity with anti-patriarchal movements like #MeToo don’t mix well with a candidate whose record on these fronts is painful.

But Trump cannot be allowed to win in November. If Trump remains in office, we can say goodbye to any chance of national progress on climate policy for at least another four years. Trump’s “climate policy” will be to fortify the border wall against climate migrants, sell off indigenous lands to fossil fuel interests, continue stacking the courts with right-wing corporate judges, and leave people to die in disasters as he did to Puerto Ricans after Hurricane Maria. He’ll also continue unraveling what is left of our government, maybe taking away for good our strongest tool for transforming the economy at the speed and scale demanded by science and justice.

If Trump wins in November, our fight will not be over, but the nature of that fight will change forever. Averting the worst of the climate crisis would become impossible. Weathering it — and protecting as many people as possible — would be the best we could hope for.

In this moment of choice, we have to hold true to the DNA of our movement. We’ve never existed to rally mindlessly behind institutional candidates. We exist to demand politicians answer to us. Social movements have always changed the world — not one person, not one organization, and certainly not one politician. So, if we must endorse anyone for November, let it be movements.

Since 2017, our movement’s goals have held strong: First, we force society and the Democratic Party to treat the climate crisis with the urgency it demands. Second, we vote out politicians that stand in the way of the landmark legislation we need. That means challenging incumbent Dems who answer to corporate special interests, and it also means voting out Trump and the GOP.

If Biden is elected President, along with a Senate and House majority full of the Green New Deal champions we have been throwing down for all primary season, our movements will be better set up than ever before to pass climate policy rooted in racial and economic justice within the new administration’s first 100 days. You didn’t misread that.

The strength of the Green New Deal movement, and the weight we threw behind Bernie’s campaign, has compelled Biden to re-write his plans from top to bottom and placed climate at the top of the priority list for him and Congress. As it stands now, Biden’s plan is not everything we want. But, with Biden, we will actually have a window of opportunity to pass the largest federal climate justice policy in the history of the United States in time to make a difference. Because, remember: we’re running out of time.

As a movement, we have reached our most defining moment in electoral politics. Whatever happens, we will be defined by how our generation votes going into November, whether we like it or not. That’s why we’ll be putting all of our people power into getting out the vote to elect Green New Deal Champions to the Senate, the House, and local office. And yeah, while we’re there, we’re gonna vote out Donald Trump too.

While we can only choose to vote for one presidential candidate this fall, our legacies will never be confined to a ballot box. The choice to vote out Trump is a stepping stone; it’s the one-time choice that allows us to make more meaningful choices down the line. Among those, to mobilize our friends and family like hell over the first 100 days of a new administration to pass the Green New Deal; to continue to stand in solidarity with movements for Indigenous sovereignty, Black lives, and immigrant dignity; and to hold all elected Democrats — including the ones we helped win — accountable to the threat of our youth power.

Again: If we must endorse anyone for November, let it be movements. Movements are going to continue to change the world — not one person, not one organization. Let’s make it easier by voting out a tyrant. Are you in?