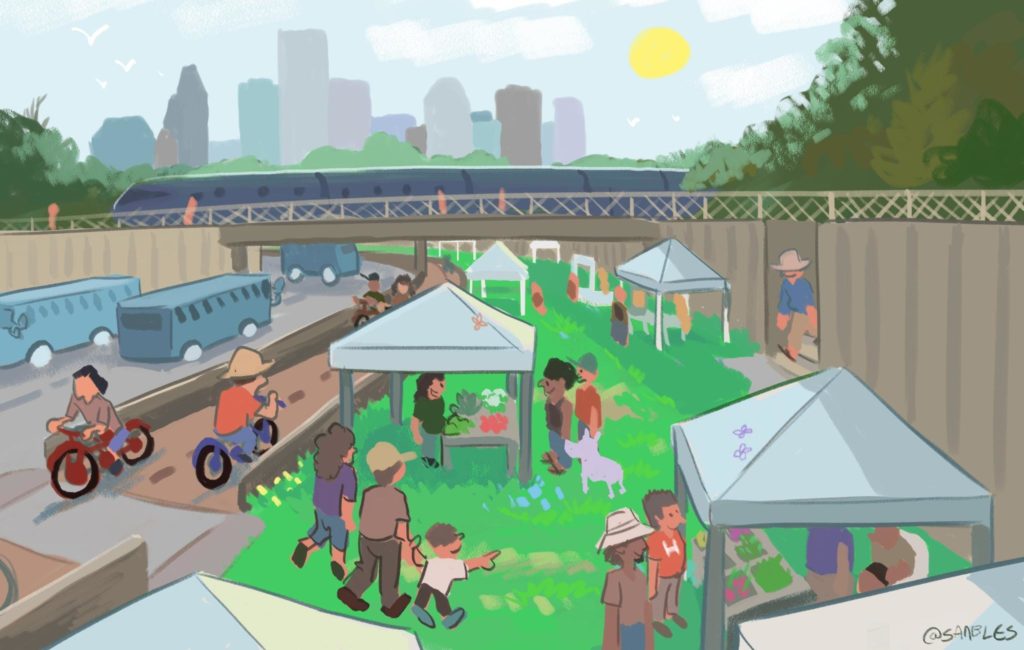 Growing up in Houston, Texas, I didn’t feel connected at all to my community. I had my small group of friends from school and we hung out at random places around the area. I didn’t know my neighbors, any local businesses, or any community leaders. I thought this was normal, until I learned Houston’s highways and roads directly contributed to the displacement of families and communities and it’s a big reason why it’s so hard to develop relationships with people in the city. If you need a car to get around the city, it’s harder to encounter people and naturally start conversations.

This is why I got involved with local organizers that were trying to stop the expansion of Highway i-45.

I-45 runs North from Galveston Beach Across Houston to Dallas. It gets really congested around Houston, so the Texas Department of Transportation made a plan to widen the highway although studies have already proven that wider highways do not improve traffic flow due to induced demand.

The expansion in certain areas will also displace low income and people of color: families in more than 1,000 homes and apartments, 344 businesses, two schools, and five places of worship. Many of the people living close to these highways already suffer from asthma and other respiratory problems due to the high concentration of pollution coming from vehicles on these highways.

Recently this year, TxDOT was told to pause the North Houston Highway Improvement Project  (NHHIP) by the federal government due to civil rights and environmental concerns raised through the public input process. This came after a lawsuit was filed by Harris County against TxDot claiming the NHHIP was violating NEPA (National Park Environmental Policy) laws. If it wasn’t for our local community organizers, none of this may have ever happened.

What Houston needs is an expansion of its public transit system. It needs to stop investing in highways that cut through communities, displace families, and most of all DON’T EASE TRAFFIC.

So what’s the solution? I for one think we should invest in communities where, at the very least, people can enjoy going outside and doing things within walking distance and not feel like they need to drive half an hour to an hour across the city to go to that one bar or park. AND not feel like design of your neighborhood is hostile towards pedestrians. The CCC would put people to work in developing these types of areas, offering better infrastructure to connect business and residential neighborhoods through parks, bike lanes, smoother sidewalks, and especially building things like the Ike Dike to protect our city from flooding.