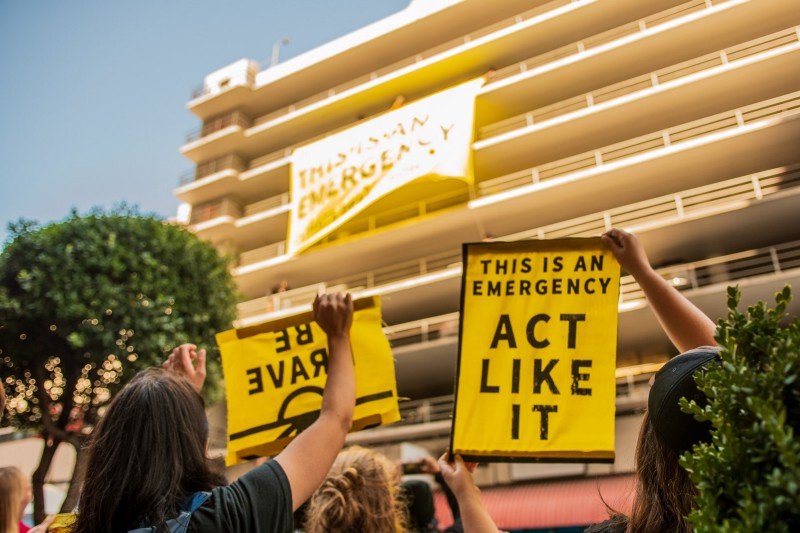 This past week, we came to the DNC to fight for a climate debate, because climate change threatens the very future of humanity. We took to the resolutions committee with hundreds of young people, prepared to make our voices heard. We weren’t sure what to expect.

Would we get shut down with no debate? Would the DNC even listen?

It was not an easy path. Many of us were initially barred from the room, and it took vocal pressure from those of us who had taken a seat well in advance to ensure they were allowed in. The debate over climate debate resolutions extended well past the first hour of the meeting.

James Zogby, DNC member of 25 years, got animated at the idea of avoiding the demands of activists, asking “are we props to be managed? Or are we the deciding body of our party? We have hundreds of young people, representing hundreds of thousands, millions. We have our constituents here.”

Ultimately, the committee voted down the resolution to hold a DNC-backed climate debate, but they heard and understood our urgency. A different resolution was amended to allow candidates to participate in third-party debates, or as the resolution put it: “multi-candidate, issue-specific forums with the candidates appearing on the same stage, engaging one another in discussion”.

It was far from everything we wanted, but it was a good sign that our generation had allies at the DNC who were willing to hear us out and meet us part way. We left on Thursday feeling optimistic.

Then came the floor vote on Saturday. At the behest of Tom Perez, the compromise resolution — the one allowing candidates to participate in external debates; the one the Resolutions Committee had voted in favor of — was pulled for more debate. We had taken our fight directly to the resolutions committee, but the much larger general body was not able to hear our concerns in the same way.

The resolution was voted down by the general body.

We have received so much support and positive feedback throughout this process, from countless DNC members but also from every major presidential candidate. We know that you understand the urgency of this issue, and that’s why almost all of them have called for a climate debate. For those candidates, we have a message.

You agree with us that climate change is an international emergency. We’re simply asking you to be brave and stand for our future. Tim Ryan has already called for a climate debate between the candidates — in bold defiance of Tom Perez’s opposition. Will the rest of you heed the call?

Together, you can make a Climate Debate happen. Storm the stage. They can’t stop you all. What is Perez going to do; hold the remaining debates without you?

Millions of Americans — especially young people — will tune in to see you share and contrast your vision for our generation’s transformational issue.

Town halls and forums are useful media tools, but they simple don’t draw the same viewership as debates. Since the candidates aren’t on the stage at the same time — like they are in debates — many viewers will only tune in to see their favorite candidates.

That’s why we need a climate debate, with all of the candidates on the same state, contrasting plans and addressing each other back and forth.

Any network would be glad to host such a big event. And look, if you show up, we’ll even moderate! You’ll get to field questions from young people and marginalized communities most impacted from climate change, and you’ll get to convince them that your vision for America is in their best interest. What better way to win a primary?

Please, be brave and fight for young people and our future. We’re not giving up, but we’d love to have more allies in this fight.

The clock is ticking. Our future is on the line. This is an emergency. We need our presidential candidates to act like it, and stand on principle, not hide behind rules and resolutions made in some political backroom.

You have an opportunity to lead. Host a climate debate together. Let Tom Perez know that the Democratic Party is a democracy, not a dictatorship. That you answer to your constituents, not to a few powerful Party insiders. The Commander-In-Chief must confront fossil fuel CEOs and special interests with billions of dollars at stake. How will you stand up to them as president if you can’t stand up to party insiders now?

Stand with us. Don’t make us fight for our futures alone.