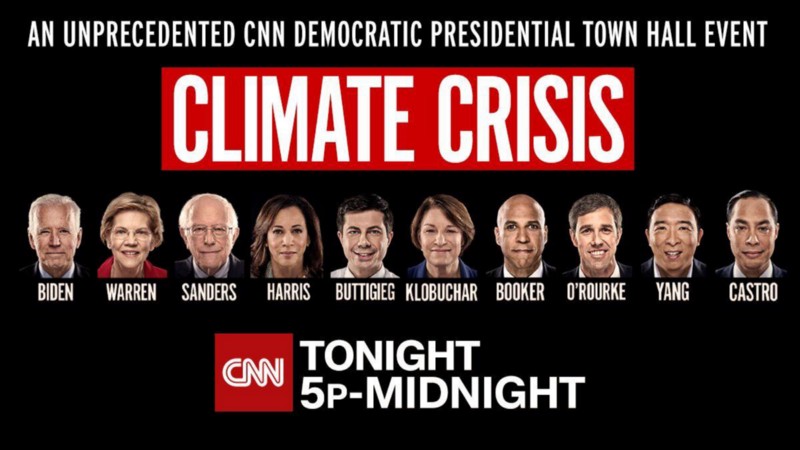 Last night was historic for our movement. On CNN’s Climate Crisis Town Hall, 10 presidential candidates engaged in 7 hours of “the most substantive discussion of climate change ever broadcast on primetime television.” This is a massive leap from 2016, when climate got less than 7 minutes of presidential debate coverage — total.

The candidates said it from stage themselves — this could not have happened without our movement.

Last night showed just how much young people in our movement are shaping the 2020 election. This town hall happened because millions of young people across the country stood up and took action to demand the media and political establishment treat this crisis like the emergency it is — and it worked. During the town hall, four of the candidates mentioned Sunrise Movement by name as a motivating force behind public discussion on the climate crisis, and Vox declared Sunrise one of the town hall’s winners.

Right now we’re on a roll, and we’re just getting started. In the coming months, we’ve got big plans to keep growing the power of our movement and pushing for a Green New Deal in 2020.

First, on September 20th we’re joining the global climate strike, when millions of people all over the world will walk out of school and work and demand action on the climate crisis. That’s just the first in a series of coordinated, nationwide climate strikes that will continue over the next six months. And all the while, we’ll be registering millions of young people to vote so we can elect a President and Congress who will fight for a livable future.

Politicians should take this as a message: You’ve seen now how much power our generation has in shaping the conversation around this election. If you want to win, keep the Green New Deal at the center your campaign

Help us keep the climate crisis and the Green New Deal in the spotlight all the way through Election Day 2020.

Chip in monthly support our work planning and executing the climate strikes, registering voters, and pressuring candidates to keep the Green New Deal their top priority.

Or, make a one-time donation instead.