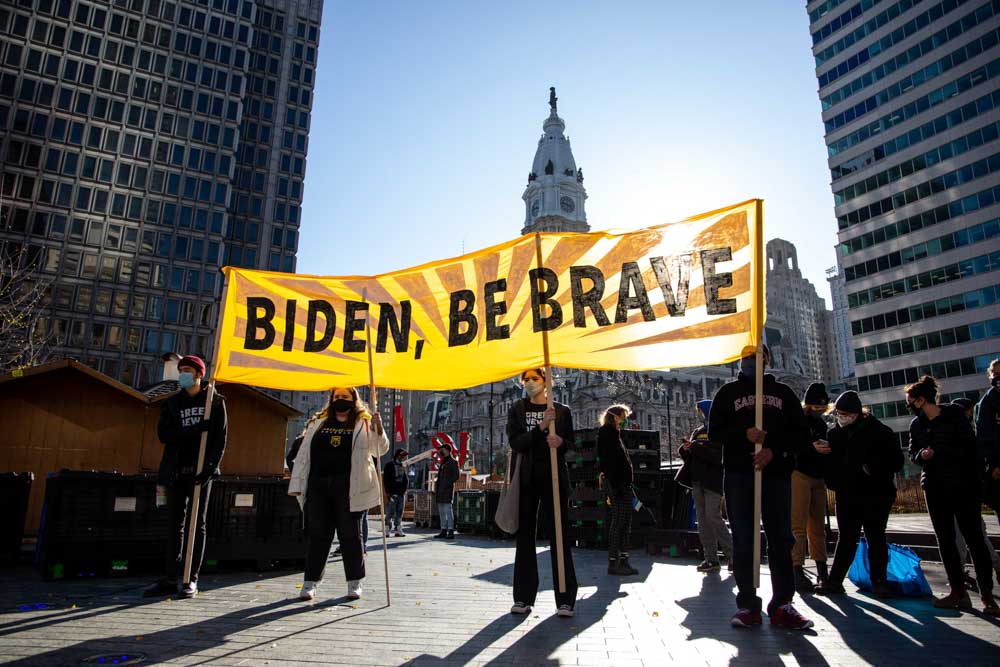 This afternoon, President Joe Biden proposed trillions of dollars in new spending on clean energy, infrastructure, public schools, and our care economy. You can read more about the specifics of the plan here and here.

We should feel deeply proud of the power that our movement has built to make a multi-trillion dollar infrastructure plan that centers action on the climate crisis, undoing environmental injustice and racism, and creating millions of union jobs the common sense of the Democratic Party. And, we shouldn’t lose sight of how much more power we must build to fully realize our vision of a Green New Deal.

If it’s passed, this plan would be the largest investment the federal government has made to address social and economic crises in fifty years. It’d create millions of good jobs and be the biggest investment our country has ever made in fighting the climate crisis. Still, this plan is nowhere near enough to meaningfully combat the climate crisis or transform our society and economy. To really do those things, we need at least $10 trillion in federal spending over the next decade (or $1 trillion/year), and we need to start making those investments as soon as possible.

We always knew the Green New Deal would be a series of bills over the course of many years, not just one piece of legislation. If we do our jobs, the plan that was announced today could be the first pillar of the Green New Deal. Our movement needs to make sure that this bill isn’t watered down by politicians and lobbyists, and back up our champions in Congress who will try to improve it. It’s up to us to ensure that this proposal is strengthened, becomes law and that it is the first of many pieces of legislation that will address the many crises facing our generation.

Read on to learn more about what Biden’s new plan gets right and what it doesn’t, what it means for our movement and what comes next in the fight for the Green New Deal.

Our window to totally transition our economy and energy grid is closing — scientists tell us we have about 9 years left to make big changes to our economy if we are going to avoid the worst impacts of climate change. Everyday that we fail to address poverty and systemic racism is a crisis for the millions of Black, Indigenous, people of color and working people in this country. There’s no such thing as “too big” for Biden and Democrats in Congress  — the crises we face demand unprecedented spending and action from the federal government, and this plan is not enough.

It’s especially disappointing because the plan Biden rolled out today falls short of what he promised on the campaign trail.  Biden was elected by young people on a climate mandate that called for a $2 trillion ‘accelerated investment’ in climate-related infrastructure over four years. This plan invests about $2.7 trillion dollars, but as of now, spreads it out over ten years. There’s a lot Biden could do to still keep to his commitment to get this money out the door as fast as possible — like making plans and commitments to deploy resources quickly, and ensure the legislation’s speedy passage — and our movement should make noise about it so that he does.

Where this plan really falls short:

At the peak of the war effort in WWII, America spent 40% of our GDP in one year — equivalent to $8.5 trillion in 2021 alone. That makes the at least $10 trillion over the decade we are demanding look small. The task of transforming our economy and rescuing our planet from the brink of collapse are just as existential to our country now as the war effort was then. As is, Biden’s plan is not enough money outright and it’s not clear if this plan would invest the money at the pace needed to meaningfully address the climate crisis. We need to spend at least $1 trillion per year over the next ten years, not $2-3 trillion over ten.

Now, this proposal is headed to Congress, where there’s a lot working against us. Not a single Republican voted for the COVID relief bill that passed last month and moderate Democrats like Joe Manchin could attempt to water this bill down or include handouts to corporations and fossil fuel companies.

Our movement is clear: there are absolutely no excuses for Biden and Democrats to not deliver on campaign promises, and our members of Congress still have the opportunity to strengthen this plan. But we must pass something, swiftly. If Republicans don’t cooperate, do it without them. If the filibuster obstructs progress, abolish it. But that’s easier said than done. The only way change at this scale has ever happened is through persistent organizing from movements. It’s what got us to this moment in the fight, and it’s what will determine whether this bill will make it to the finish line into law.

The good stuff about the American Jobs Plan

On the whole, this entire proposal is a massive win for our movement, and a real result of the power we’ve built over the past few years. Four or five years ago, the biggest idea any politician in America had to tackle the climate crisis was a carbon tax. President Obama’s Clean Power Plan was proposed to cost just $8.4 billion. The fact that the Biden administration is proposing ~$2.7 trillion (with more on the way – keep reading!) and that they are taxing corporations and billionaires to pay for it is a historic step in the right direction.

This plan makes clear that every dollar the government spends on infrastructure will be used “to prevent, reduce and withstand the impacts of the climate crisis.” Our movement needs to get loud and get in the streets to ensure the most ambitious version of this plan is passed into law and that it is the first of many bills that will create good jobs confronting the crises of climate change, racism and poverty.

What this means for our movement

When our movement was just getting started, we were called naïve and too radical, and top Democrats were calling the Green New Deal the “Green dream, or whatever.” Climate change was at the bottom of the list of political priorities for the Democratic party, and there was no real plan to combat the climate crisis from any party or mainstream political leader. The President openly denied climate change and did whatever he could to make life easier for the fossil fuel industry. The President before him bragged about how much oil was drilled under his administration.

Just a few years later, the President is releasing a plan to spend an unprecedented amount of money creating good jobs combating climate change and addressing systemic racism. And, he’s taxing corporations and billionaires to pay for it. It’s not enough, but it’s a historic step in the right direction.

The work of movements like ours is slow, and it’s hard, and it isn’t always clear how all of our work adds up. Today isn’t a cut and dry win, but it’s one of those days that makes me believe in the power of organizing and movement building. It makes me feel hopeful about the power of young people and it makes me wonder what else our movement can accomplish in the months and years to come.

Like many other moments over the past few years, we should take time to reflect and to celebrate. And then we continue the fight.

It’s our job to do what we can to strengthen the plan Biden rolled out today, make sure it becomes law as soon as possible and that it is the first of many pieces of legislation that will address the many crises facing our generation. The only thing worse than not meeting this moment at scale would be not meeting it at all. This proposal is headed to Congress next, where Republicans and moderate Democrats will try to water the bill down or stop it altogether. We need to talk to our neighbors and friends and get in the streets to make it clear: we need transformational change, and if politicians won’t move fast enough — our generation will force their hand.

Even if this proposal became law, it won’t be enough. We can’t let Biden and Democrats in Congress off the hook — we need to continue fighting for legislation that will guarantee millions of good jobs fighting climate change and making our society safe, healthy and strong. We always knew the Green New Deal would be more than a single piece of legislation and this bill is just the beginning.

Biden has said he wants to have a ‘Rooseveltian Presidency’ and that tackling climate change would be his top priority. If that’s true, he will need to use his bully pulpit to build the political will for a more transformative vision, like FDR famously did. Biden must tell the truth about the scale of the climate crisis — as he’s done with the COVID crisis — and work to rally the political will to truly lead the world in stopping it.

On April 7th, our movement is taking action all across the country to demand Members of Congress pass legislation that guarantees good jobs for all, invests $10 trillion over the next decade to create millions of union jobs addressing the crises of climate change, economic inequality, and systemic racism. Members of Congress will be at home for Congressional recess, so it’s our first big opportunity to put the pressure on them and make it clear that our generation is ready to begin the decade of the Green New Deal.