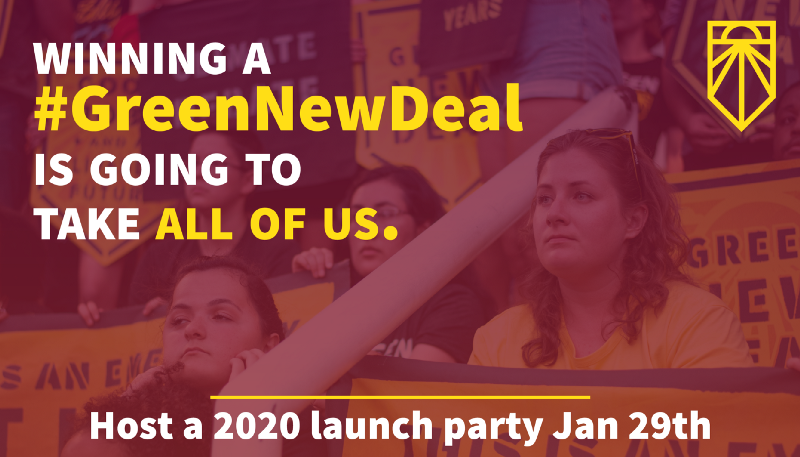 Hi there, I’m Dyanna, Sunrise’s Organizing Director. Welcome to the Decade of the Green New Deal!

As we kick off the New Year, I wanted to share some reflections on where we’ve come and where we’re headed in the coming months. I won’t be asking you for money — my only ask is that you take five minutes to read it and think about what kind of role you want to have in this movement in 2020.

When I think about 2020, I feel humbled by the uniquely important moment we’re living in. This is going to be a pivotal year — not just for our generation, but for every single generation that will follow us for centuries to come.

In 2020, we have a chance to be part of a historic project. We have the opportunity to not only defeat Trump but to also send the billionaires who have been running the show in Washington packing and usher in a new social and political moment in America. One where no matter the color of your skin, where you are from, or how much money you have in your pocket you have a right to a dignified life: clean air, clear water, a safe home, a good job, and a stable climate.

But it could also go the other way: we could be in for four more years of a President that sows division and fear. Four more years of families living in fear of immigration raids tearing them apart. Four more years of fossil fuel billionaires polluting our air and water. Four fewer years that we have to tackle the greatest existential threat humanity has ever experienced.

That’s the responsibility and privilege we have being alive at this moment in time. Throughout history, we’ve seen countless times that when we’re in this kind of moment we see people — from the Civil Rights Movement of the 60s, to the workers movement during the Great Depression, to the abolitionist movement — coming together to force those in power to live up to the ideals this country is supposed to stand for. The movements began when victory seemed unlikely, if not impossible. But they whey won because millions of people looked into the darkness and saw hope in acting together.

That’s why I’m pouring everything I’ve got into our plans for 2020. In the next 12 months, we need to bring in as many people as possible into the movement. We need to build an unstoppable force that can elect a President and Congress who will make the Green New Deal a reality and then hold their feet to the fire after the election.

When we launched this movement in 2017, we called ourselves Sunrise because we believed that this dark time in America would come to an end. It’s now 2020. That time when we can end this dark time is here. If there ever was a moment to get involved, it’s today.

We have a three-part strategy to bring about this new chapter in our history: Organize, Vote, Strike.

1) Organize. History shows us again and again that when social movements get to a large enough scale and high enough level of disruptiveness, they can transform the unthinkable to the status quo, seemingly overnight.

Right now the climate justice movement is a long way from the scale we need to be at to do that. That’s why we have a plan in 2020 to massively grow the movement by talking to our communities about what’s at stake this year, forming or building Sunrise hubs where we live, and relentlessly inviting everyone we know who shares our values to join the movement for the Green New Deal.

2) Vote. Trump won the 2016 election by fewer than 80,000 votes in three states. A margin of only 4,000 votes sent AOC to Congress where she has transformed the face of American politics and catapulted the Green New Deal into the national spotlight. Polls are showing that the 2020 elections are going to come down to the wire again. Every vote is going to count.

But the good news is that huge majorities of young people support the Green New Deal and we’re going to be the largest bloc of eligible voters in 2020. By turning out our generation in force in the primaries this spring and the general election in November, we can shake up Washington and pave the way for the decade of the Green New Deal.

3) Strike. We’re up against some of the wealthiest people who have ever existed on Earth, and they’ve shown they’re absolutely hellbent on getting richer, even if it means killing millions of people in the process. It’s not going to be easy to beat them, especially with our broken political system that lets the rich and powerful call the shots.

The only way to get the political establishment to make the Green New Deal a priority in 2021 and beyond is by disrupting business as usual. Young people around the world have already been doing this with the #ClimateStrike movement. This year, we’re going to turn up the heat, starting with massive strikes on Earth Day to make sure that the Green New Deal is THE story for 2020 as we head into the elections.

After we push as many Green New Deal champions into Congress as we can, we will shock the political system again with the biggest wave of strikes, marches and walkouts this country has seen in generations. All this year, we’ve got to build our movement so we can flex when the window of opportunity opens up in 2021 to start making the Green New Deal law.

We only have 12 months to do it, but we have the people, the tools, and the will to make it happen. And we’ve got plans to kick off the year strong.

On January 29th, Sunrisers across the country are going to host “Our Plan to Win the Green New Deal: 2020 Launch Parties” where we’ll show two epic mini-documentaries walking us through what’s at stake and our roadmap for 2020.

Because we need to grow our movement massively in 2020, we’re doing something different. We’re asking everyone in the movement to host one and invite your friends, classmates, or family to join. This kind of personal outreach to groups of people you know has been proven again and again to be the most effective way to bring new people into the movement.

So, whether you’ve been showing up to hub meetings or following us online, I want to ask you to step up — maybe do something you’ve never done before — and help us grow this movement. We’ll get you everything you need: the mini-documentaries, a detailed guide for hosts, and coaching support in case you have any questions.

Let’s rise to this moment together. Sign up to put on a Launch Party with your friends on January 29th.

If you’re anything like me, you’re coming into 2020 feeling a lot of different things: fear, anxiety, dread, confusion, maybe a little excitement and hope. I want to say: you’re not alone. I feel that too. I’ve come to think that’s just what it feels to be a moral and compassionate person living in this kind of moment with such instability and uncertainty.

But I also feel really lucky to be living in a time when turning things around also feels within reach. In 2019, millions of people got involved in the movement for the first time. We forced the leading Presidential candidates to back the Green New Deal and reject fossil fuel money. We started to turn the tide. Now, in 2020, we can finish the job. Are you in?