State of the World

Our economy is broken. Between March and June 2020, while 40 million people lost their jobs due to the coronavirus pandemic, America’s billionaires amassed more than half a trillion dollars.

Much of this money — no one can be sure how much — will be hoarded in philanthropic institutions that serve as legal tax havens to facilitate the transfer of wealth from the many to the few. In order to escape paying their fair share of taxes to contribute to the economy they benefit from, the elite will spend a small percentage of this wealth under the auspice of charity. Like so many nonprofits in the movement ecosystem, the legal entities of Sunrise will receive a sliver of this small percentage to fund our work fighting for the Green New Deal.

In that same period between March and June 2020, when those 40 million people were out of work, our movement raised $600,000 through grassroots donations in increments of just about $22.00 each.

These two worlds of fundraising — old school philanthropy and the digital grassroots — feel like microcosms of the world we’re trying to escape and the world we’re trying to build. Much as we all still use fossil fuels to organize ourselves out of the fossil fuel economy, we still rely on the fundraising structures that exist to fund our visionary goals.

As our movement organizes for the Green New Deal — and a federal government that reins in the massive wealth hoarded by millionaires and billionaires and instead invests in community resiliency and infrastructure — our fundraisers reckon with the shortcomings of philanthropy as we fund our transformative work and build our grassroots donor base.

We have set up legal entities, drawing on the legacy of social movement organizations from the Student Nonviolent Coordinating Committee in the 1960s to United We Dream today, in order to accept and spend the funds we raise. We acknowledge that these centralized organizations represent only a fraction of our entire movement.

Whether it means mobilizing thousands of people to give in small amounts or moving large checks from the monied to the movement, fundraising is about organizing people and organizing money. We all bear responsibility in this, which is why volunteer and staff fundraisers train Sunrise members to build their fundraising skills. We are creative in experimenting with methods of financing our hubs and moving resources to our base, in order to overcome the legal barriers put up by the establishment to disempower young people, communities of color, and the working class.

2. Donations take many forms, including time.

A monetary contribution is only one way to give to the movement. Many young people choose to give their time to building their local hub or phonebanking for Green New Deal champions, and we recognize these volunteers as the lifeblood of Sunrise. We hold ourselves true to Sunrise Principle #6, “we ask for help and we give what we can.”

3. We do not change who we are or how we present for funders.

We are a movement of young people and we let that show, dressing for funder meetings in the same way we’d dress for a training. We recognize that philanthropy has long been used as a tool to uphold capitalism and white supremacist culture. We resist the power that philanthropy attempts to hold over us by growing our small dollar donor base. We recognize we may lose foundation support for saying this.

4. We do not accept contributions with strings attached.

We have turned down checks that come with expectations of input on our strategy and will continue to do so. Occasionally we will solicit project-based grants from foundations to fill gaps in our organizing, leading with the needs of our movement and not with the desires of funders.

5. We believe that money amassed through the wrongs of history should be spent righting them.

Capitalism and white supremacy leave precious little wealth in this country unspoiled by pain and exploitation. We accept money in service of dismantling the systems that created our country’s massive wealth inequality in the first place. Ultimately, a donation is a reflection of alignment, not of endorsement.

6. Our vision of resources is rooted in abundance, not scarcity, and we live this out as fundraising partners with our movement allies.

We issue joint fundraising appeals, make connections for each other, and organize owning class donors in our movement to give directly to other organizations. We push our institutional funders to rethink their funding priorities, asking them to resource our partners, from visionary community groups led by people of color to organizations that likewise build mass movements for transformational change.

7. We know we must spend money on elections to build our political power.

Electing Green New Deal champions into office is a core part of our theory of change. Our endorsed candidates, often BIPOC working class individuals, lack the funds and networks of establishment politicians. We use all the tools in our toolbox, including our federal PAC, to resource our champions in compliance with election law. Using these tools to their fullest potential is how we win.

8. Billionaires should not exist — but so long as they do, we view philanthropy as an imperfect form of redistribution.

Our movement organizes for real redistribution that breaks up the monopoly on wealth held by the elite, creating a more equal society through reparations and taxing the rich. We welcome funders who wish to join us in this fight, encouraging them to embrace risk by investing in youth movements. 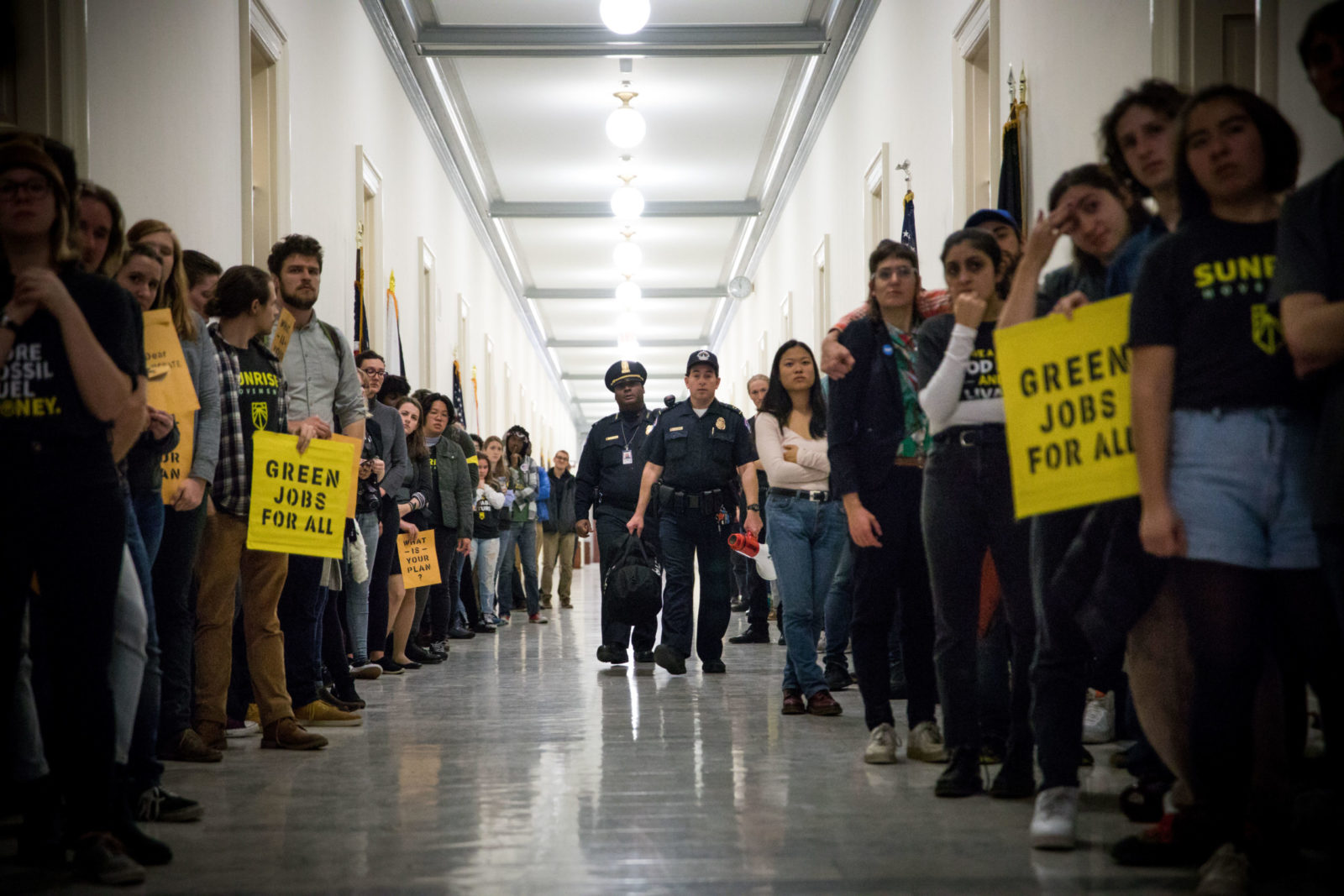 Donate to help grow the climate revolution. Together we can win.

Sunrise is a movement of young people to stop climate change and create millions of jobs in the process. We’re building people and political power to make this a country where all of us can have a livable future – no matter the color of our skin or where we come from.

Can you make a donation today to help us fight for a Green New Deal and win?