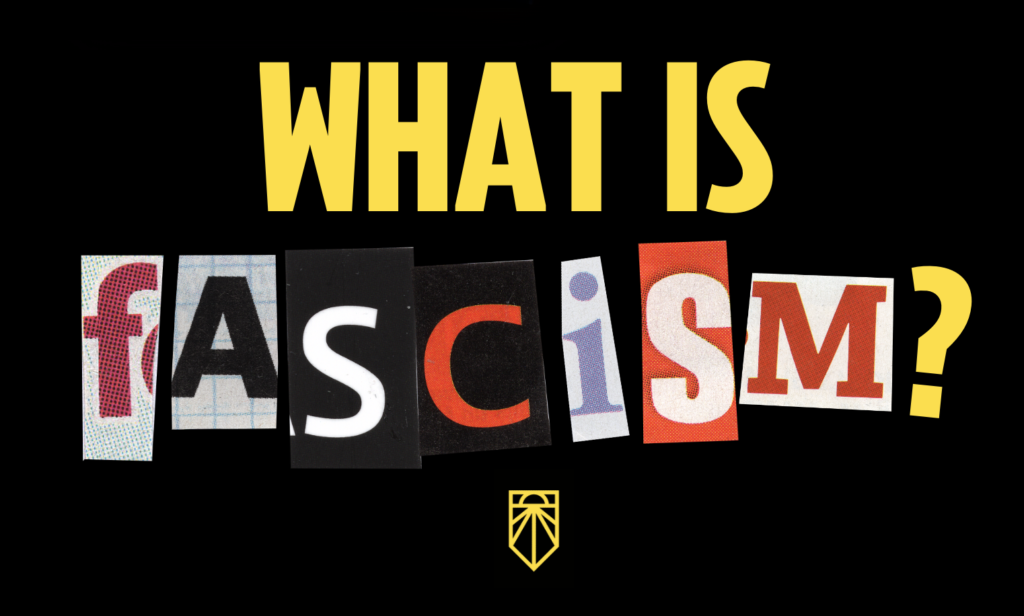 The word “fascism” has been thrown around a lot lately. And I think some people are wondering, what is “fascism?”

Fascists use violent “us vs. them” tactics to oppress people of color, immigrants, progressives, and our most vulnerable in order to “make America great again,” and gain more authoritarian power for white supremacists.

What does fascism look like? We’ve seen a lot of it the last few years.

Strongman, cult leaders like Donald Trump, with the help of Fox News and even the Supreme Court are trying to control us and take away our rights.

For example: after the rise of Trump, it has become an increasingly common Republican Party line to back these oppressive policies like national abortion bans, book bans in schools, and “Don’t Say Gay” anti-trans laws.

The Republican Party has repeatedly rigged the system through things like gerrymandering, to elect GOP majorities without the majority of votes. Then, once they’re in power, they promote their friends to lifetime seats throughout the courts in order to pass authoritarian laws.

For example, despite 64% popular support by the public, Trump and Senate Republicans managed to strip away our reproductive rights by building a Supreme Court that overturned Roe v. Wade. That doesn’t happen unless an extremist minority is able to gain power in government.

This concept is not new. When Hitler rose to power, he did so only after the German government conceded to far-right, white supremacist notions that enabled his ability to seize control and impose the Holocaust. But without the backing of those in power, Hitler would not have succeeded.

It is two years after a white supremacist held the highest office in our country, and still, his far-right, extremist beliefs are being spouted across the nation by many who follow him. Many of them are running for office right now.

They are fighting for the fossil fuel industry, bent on destroying our communities for profit, despite a worsening climate crisis. They are fighting for wealthy white supremacists to succeed on our backs. They want state sanctioned discrimination. And they want a repressive military state that oppresses people and throws them in prison.

Elections can often be framed as an opportunity to win a lot of things, but this election is also about not losing to a violent, fascist movement. We have to keep them from gaining power so that they cannot continue stripping us of our rights.

So yeah, we’re Fighting Fucking Fascism, and we need you to join us. Just think, what is your role going to be in fighting the rise of fascism? Will you speak out, or sit this out?

It is going to take more than an election to shut this shit down, but we have to stop it here first. Only then can we win the things we are fighting FOR as a movement.

Fight Back Against Fascism