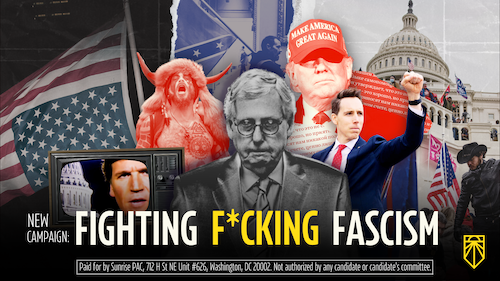 After a year of really tough political moments for young people with more school shootings, the overturn of Roe v. Wade, the rollback of the EPA, and more instability, so many young people have checked out of the political process altogether. And at the same time, our vote is more important than ever. So this midterm election, we worked hard to think about what our work should look like, and what we wanted to achieve in a particularly difficult year, with a less inspiring electoral map.

This election can benefit us if we play our cards right

We learned so much from the past two years of the Biden administration we learned that the progressive politicians we voted into Congress are the only ones fighting to pass legislation to fight the climate crisis and do more for working people. But with a far-right minority doing everything in their power to take our rights away, corrupt democrats working for corporations over their constituents, and a broken democracy, it is clear we need much more power. If we ever want to win a Green New Deal, we must use this election as part of our strategy to build, grow, and most of all, to set us up for the big work to come.

Some Facts: What we know and what will benefit us

It will be utterly terrifying if the Republicans gain control of Congress. There is no path towards federal Green New Deal legislation if the people with power don’t believe that the climate crisis exists. Not to mention, it is their goal in life to strip us of our voting rights every chance they get. We NEED to keep the Senate and the House.

Despite historic trends, this year may actually be an opportunity to hold onto both chambers – or at least the Senate. The Senate map is showing a few uniquely beneficial states where we can not only defeat a Republican, but actually elect a progressive Senator to office. Those are Pennsylvania and Wisconsin, where the fight extends beyond 2022, and where we’ll need deep organizing infrastructure.

Pennsylvania:
In Pennsylvania, Dr. Mehmet Oz is running against former Lt. Governor John Fetterman. Although Fetterman has a long long way to go on his climate and immigration platforms in particular, he has vehemently spoken out against the filibuster and has advocated for unions and workers rights. He backed Bernie Sanders in 2016, is an economic populist and is viewed as a progressive by the media and the public. If he wins, many will see it as a win for the progressive movement. And if he loses, they will see it as a progressive loss.

Fetterman defeated centrist Dem, Conor Lamb in the PA Senate primary, which sent a huge message to the Democratic Party that voters are sick of status quo candidates with no platform and no plan walking away with the nomination just because they promise to abide by the do-nothing dem status quo. Lamb was the poster child of do-nothing dems, and losing to John Fetterman is a HUGE signal to the democratic party that their long term strategy may not actually be that strong with the Lamb’s of the country. Now, if Fetterman goes on to defeat the GOP, it proves that voters are mobilized by progressive candidates with real solutions and actual platforms. That’s good for us, because it means A, more progressives in Congress, and B, a road to making the Green New Deal an essential platform in a Democrat’s winning strategy ahead of 2024.

The reality is that right now, all of the progressive candidates are turning inward to appease consultants and the Party. But that means we have an essential role to play in telling the story of their candidacies.

Now, if that doesn’t seem like an opportunity to make a narrative intervention with the Democratic Party, just get ready for that example to be paired with the incredible win of Summer Lee in PA-18 for Congress too. Pennsylvania wants progressive representatives, and they’re screaming it to the party on the ballot this year.

Wisconsin:
Similarly, we have a massive opportunity in the Wisconsin Senate election to defeat GOP fascist Ron Johnson, and replace him with Lt. Governor, Mandela Barnes, a progressive who will fight for environmental justice.!
Barnes is a progressive for all intensive purposes, THE progressive senate candidate this year. He will fight for reproductive rights, bold climate solutions, affordable healthcare and housing, higher taxes on the rich, support for unions, and more. If he defeats a GOP incumbent, it will send shockwaves through both parties, and hopefully, will spark a shift in how national candidates approach elections.

These two seats aren’t everything, but for our movement, they are good opportunities to defend the Senate (before we work to abolish it one day) and get two candidates in office who will support abolishing the filibuster and fight for working people, and will serve as a way to build and grow our movement’s strength.

So those are the best opportunities out there right now. Alongside them are a ton of toss-up, competitive races across the country, and all them could protect or lose this half of the legislative branch that is really important and also stupid and should not exist😈.

WHAT DOES THIS MEAN FOR SUNRISE?

This year, we want to lean into building the movement and setting up our people to be powerful, strategic, and clear-eyed about the work that needs to happen.

That’s why we are focusing on a smaller slate of races this cycle; these two for the Senate, and our list of progressive champs from the primaries in the House. We are running a powerful campaign to ensure young people vote, but most importantly, to bring more people into Sunrise and seed our movement in important places where we need to grow.

Okay, now here is the plan:

We are tired of an extremist minority having a say about our bodies, our lives, and our rights, and we are gonna fucking stop them where we have power!

We are running a massive phone and text banking program to reach out to young, working class, and Black and brown people who haven’t been supported by electoral efforts in the past. If they haven’t voted ever before, we want to take the time to talk to them. For so long, the democratic party has asked for our voice in a vote, but has done close to nothing to prove why they’ll help us. So instead, we want to help each other.

We want to use the democratic party to win the things we need for our lives to be better. It’s not for the party, it’s for each other. It’s for a strategy that ends in the Green New Deal, and that requires an organizing effort in an election cycle that doesn’t just spit out the talking points of a party.

Alongside that distributed program, we are partnering with Working Families Party in Wisconsin, and Unite Here in Pennsylvania, to knock doors and build community. We are also running a huge digital ads campaign to make sure all corners of youths on the internet see what we are fighting against and who we are voting for (both in candidate and in community).

So that’s it. That’s the plan. We are staying clear on the goal to grow our movement in Pennsylvania and Wisconsin; two states that will always be instrumental in elections and could lead to the deciding votes in Congress for or against our legislative priorities. We know that we need the democratic party to wake up and listen to our generation, and we can do that by proving progressives will win in big elections like these. So help us Fight F*cking Fascists, build the movement, and set ourselves up to win bigger in the next 4 years.