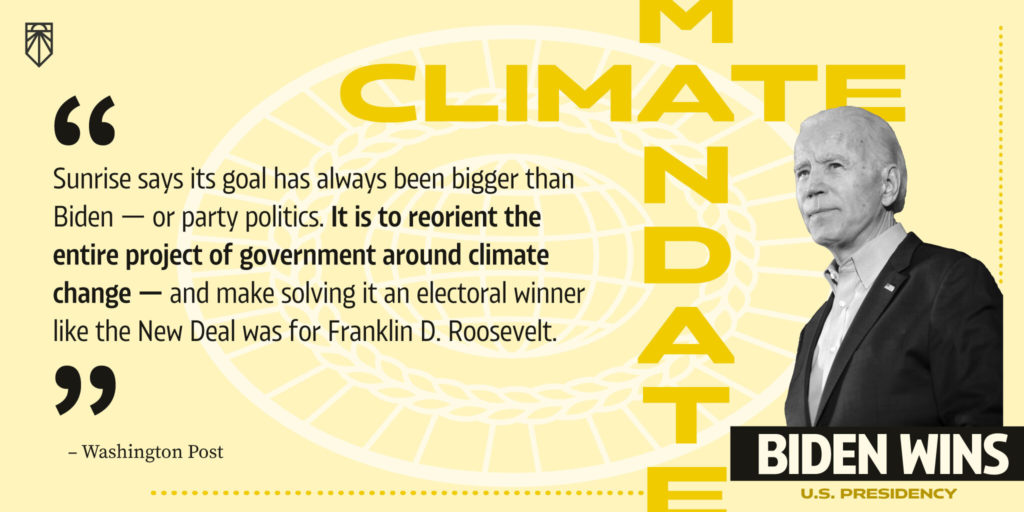 This year, we saw the power of the Green New Deal and the Sunrise Movement to propel candidates to victory in Democratic primaries – mostly notably in the cases of Ed Markey, Jamaal Bowman, Mike Siegel, and Cori Bush. Now, the youth turnout for Joe Biden shows that climate was a winning issue in the general election as well.

Since the summer, Sunrise has been deploying money, volunteers, and resources to have a major impact on youth turnout in the 2020 General Election—including reaching approximately 3.5 million unique young voters through our combined coordinated and independent direct voter contact programs. If you include our efforts in the Presidential and Congressional primaries, our total voter outreach for the 2020 cycle crosses 8 million voters. This does not include the tens of millions of voters who we have reached and influenced through social, earned, and paid media by making climate change a top priority in this election for the Democratic Party.

Young people were significantly more motivated to vote and turned out in record numbers compared to 2016. In fact, according to CIRCLE’s estimates, once all votes are counted, youth turnout for the 2020 presidential election will be the highest in history, with 53%-56% of voting-eligible young people, ages 18-29, having cast a ballot. Climate change is a major reason why.

In 2016, many young people stayed home, and there were fears that the same lack of enthusiasm would doom Biden; like Hillary Clinton, he had failed to attract support from young voters during the primary. But then, Biden embraced climate change, declared it as his “number one issue”, leaned into it as a major part of his platform and the closing strategy of the campaign, and put forward the most ambitious plan we’ve ever seen from a major party candidate in history. And it worked. A new Harvard Kennedy School poll of Americans ages 18 to 29 found that enthusiasm for voting in 2020 was on par with 2008, when we saw historic youth turnout for Obama. It’s this enthusiasm that snagged Biden a victory.

Similarly, Chuck Schumer and Nancy Pelosi have both listed a major climate infrastructure package as their top priority should Democrats control the government. Simply put, now that Democrats have won, there will both be commitments and a strong and unprecedented mandate for historic climate action, in which Sunrise Movement played a defining role.

Climate change playing a key role in the presidential race wasn’t a foregone conclusion from the start. Sunrise Movement and our allies campaigned aggressively from the start of the Democratic primary to force a race to the top around the Green New Deal. Candidates, including Biden, heeded the call, releasing more and more aggressive climate plans in the direction of the Green New Deal’s framework and ambition. Biden, in response, released his climate plan as his first policy rollout. However, other leading candidates in the race — most prominently Bernie Sanders and Elizabeth Warren — surpassed Biden’s climate plan in their ambition, and as a result, garnered more enthusiasm from youth voters in the primary.

After Sanders’ exit from the primary, Sunrise Movement led the charge with NextGen America, Justice Democrats, March For Our Lives Action Fund, United We Dream Action, Alliance for Youth Action, Student Action, and IfNotNowOrg to sound the alarm on the lack of enthusiasm at the time amongst the youth electorate for Joe Biden’s candidacy, penning an open letter to the Vice President and his campaign about the need to embrace a more progressive agenda and take some concrete steps to appeal to young voters.

The campaign heeded the call, senior aides began meeting with the youth groups, and beefing out its Young Americans for Biden program, including hiring climate and youth vote veteran Hannah Bristol to serve as the program’s director. Varshini Prakash, Sunrise Movement’s Executive Director, was invited to serve on the Biden-Sanders Task Force, where she and others advocated for changes to Biden’s climate plan which were then reflected in the Build Back Better platform which has since served as the centerpiece of Biden’s campaign message. In what was perhaps an unprecedented move, Biden shifted in a more progressive and bold direction since the primary and, as a result, Biden’s favorability among young voters went up 45 points from May to October. While Biden’s favorability among all other age groups was virtually unchanged, his net favorability with voters aged 18 to 34 went from -22 in May to +23 in October.

It soon became clear that young people would end up voting in record numbers. An analysis of early vote data from battleground states showed that younger voters made up a larger share of the electorate than at the same point in 2016 or 2018. In Texas, turnout among young people went up more than 600% from 2016, and the share of early voters between the ages of 18 and 29 went up 36% in Minnesota, 13% in North Carolina, and 19% in Arizona compared to 2016. Moreover, 64% of those young voters who cast early ballots didn’t vote at all in 2016.

Despite Trump’s attacks, Biden’s team leaned into climate change as the closing message in the final days of the campaign, producing two major climate ads “aimed at reaching youth voters” according to a campaign spokesman.

“The campaign worked with leadership from the youth-powered Sunrise Movement to shape its climate proposals, and Biden, in turn, benefited from Sunrise’s vast voter-outreach operation that has sent more than a million post cards to young voters in swing states in recent weeks.” – TIME

The Independent Expenditure organizing arm of Sunrise Movement focused on swing states in the Presidential race where youth were poised to make the biggest impact, with a top-tier focus on Michigan, North Carolina, Pennsylvania, and Wisconsin and including Arizona, Colorado, and Florida. Across those states, we reached 2.5 million young voters via five different voter contact tactics by Election Day. Additionally, we mobilized and equipped Sunrise leaders all across the country to lead vote tripling programs at upwards of 1,000 unique polling places on Election Day.

The IE program operates from Sunrise’s firm understanding that young voters are motivated to vote on the issues. Our experience has shown us that once young voters learned about the strength of Joe Biden’s climate plan, more of them felt excited about voting for Biden and even donating their time to get out the vote. By Election Day, Sunrise was projected to have invested $1 million in the General Election IE program — with upwards of $200,000 of that budget being spent on digital ads.

Sunrise Communications funneled nearly $262,000 into digital ads for both Swing State recruitment and persuasive down-ballot efforts. As of 11/3, our ads reached 312,066 people in swing states such as MI, PA, WI, NC, and MI, as well as 245,532 voters in TX-10 and 1,672,676 voters via national ads, reaching over 2 million people across the nation and, as of the end of October, acquiring 2.75 million video views. Out of those ads, 26,968 unique people have been moved to take action with Sunrise. The IE video team also produced a viral pro-Biden video ad that accrued a natural reach of well over a million viewers across Instagram and Twitter alone and was shared by a large handful of celebrity influencers with millions of followers.

Sunrise has shown to be an effective political player in high-profile blue-on-blue primaries. We made 846,000 calls for Jamaal Bowman’s historic win over long-time Democratic party leader Eliot Engel in NY and helped defend Senator Ed Markey in Massachusetts by driving historic youth turnout, owning the internet in collaboration with the “Markeyverse”, and producing one of the most viral ads of the 2020 cycle — the “Green New Dealmaker”. Not only did everyone who stuck their neck out to fight boldly for the Green New Deal retain their seat, our efforts helped elect a whole new slate of Squad members into Congress that others hesitated to invest in.

Sunrise endorsed 19 races (3 Senate, 16 House) where candidates ran on a Green New Deal. With an army of young volunteers, Sunrise surpassed one million phone calls to voters in these districts with 11,200 volunteer shifts, in addition to creating viral video content, writing op-eds and letters to the editor in small-town papers, and protesting against the corrupt opponents of our endorsed candidates.

In the final week before the election, Sunrise’s coordinated campaign partnered with the Texas Democratic Party to go all-in to flip Texas, the third youngest state in the nation. Sunrise collaborated with former presidential candidate Julián Castro and Rep. Alexandria Ocasio-Cortez to make over 100,000 calls to voters in South Texas, where turnout is historically low. In addition, Sunrise made over 360,000 calls to support Julie Oliver (TX-25) and Mike Siegel (TX-10), both districts running through Travis County (Austin) which reported one the highest increases in voter turnout, already surpassing numbers from 2016 days out from election day.  And, though Texas didn’t flip this time, it was close.

Blue-on-Blue race: “The fight for the direction of the Democratic Party”