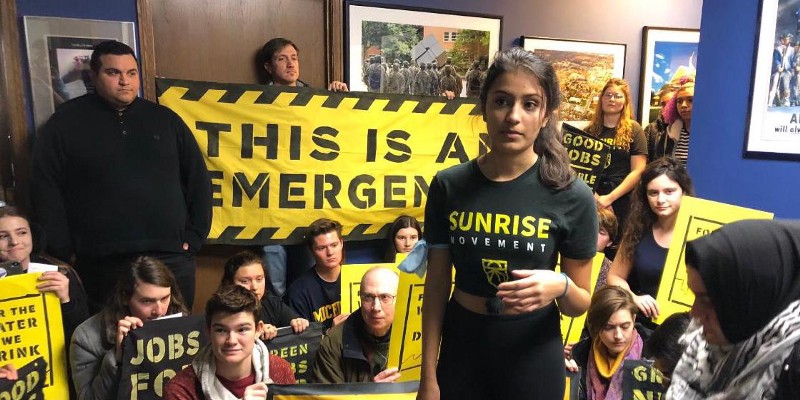 Three weeks ago, hundreds of young people stormed the field during the annual Harvard vs Yale football game, holding banners reading, “Nobody wins. Yale and Harvard are complicit in climate injustice,” calling for their universities to divest from fossil fuels. When asked to leave the field, they responded with a resounding:

42 demonstrators were issued summonses for disorderly conduct by Connecticut law enforcement after having delayed the game by almost an hour.

Meanwhile, here in Michigan, I was at a retreat with local elected officials working on sustainable public transport options for Washtenaw County when “ARRESTS HAVE HAPPENED” lit up my phone screen. I watched with bated breath as an image downloaded. My friends were being handcuffed by police officers in our Congresswoman’s office.

We had staged an overnight sit-in at the Ypsilanti office of Rep. Debbie Dingell (D-MI). For the past ten months, the Ann Arbor hub of the Sunrise Movement has been trying to get her to cosponsor the Green New Deal, a blueprint for tackling the twin crises of climate change and economic inequality at the scale that both science and justice demand. Despite representing one of the most progressive districts in the country, she has responded with false Fox News talking points: “I don’t want to ban airplanes.”

Three of our demonstrators who stayed the night were arrested in the morning, just hours before the Harvard and Yale students were.

These two actions are indicative of a shift in the tactics of the youth climate movement.

On September 20th this year, millions of young people made history by taking to the streets all over the world, demanding climate justice. However, few took escalated action, and even fewer risked arrest. Today, December 6th, we strike again. This time many of us will escalate, engaging in sit-ins, road blockages, and other disruptive actions that send a clear message to powerful institutions like Harvard and Yale and to politicians like Rep. Dingell: Enough is enough.

Why? The reason is simple. We’re getting mad.

For decades, fossil fuel billionaires and corrupt politicians have lied to the public about the climate crisis, putting profit over people and destroying the planet in the process. Now, we have reached a critical juncture. Just last week, the U.N. released a bleak report, stating that we are nowhere close to reaching our emissions reductions targets (in fact, emissions rose 0.6% last year), and that we must take drastic action right now if we are to save our planet.

The massive change we need will not happen overnight. Rather, we must mobilize like never before to make it happen.

Young people should not have to spend their childhoods fighting to defend their right to a livable future. We did not create this crisis, yet we are forced to deal with its repercussions. We wake up every day to headlines about natural disasters, rising sea levels, and food and water scarcities. Communities of color and low-income communities like Flint are disproportionately impacted. Meanwhile, we are watching corporate executives continue to profit off of the destruction of our futures, decades after first identifying the threat that climate change poses. Worse, the vast majority of politicians turn a blind eye (the International Monetary Fund estimates global fossil fuel subsidies to be nearly 5 trillion dollars), promoting solutions that are incrementalist at best, rather than the bold action that scientists are calling for.

We are not just mad, we are furious. Today, we are not only striking from school and marching in the streets (check out Detroit’s climate strike!) as we did on September 20th, but we are also using escalated tactics en masse for the first time.

We have learned from our predecessors. In America, the New Deal Movement, the Civil Rights Movement, the Anti War Movement, and the indigenous activists of Standing Rock, among many others, have paved the path of nonviolent direct action that we are now embarking on. They have proven, with lunch counter sit-ins and extended occupations, that peaceful, but escalated action is necessary to topple systems of oppression and inspire radical societal change.

The science and the warning signs are crystal clear: now more than ever, we are in need of such change. The youth climate movement is done waiting to be taken seriously by those in power. Swedish climate activist Greta Thunberg said as she arrived at COP25 three days ago, “People underestimate the force of angry kids… If they want us to stop being angry, maybe they should stop making us angry.”

Today, we are turning our anger into action. And today is just the beginning.