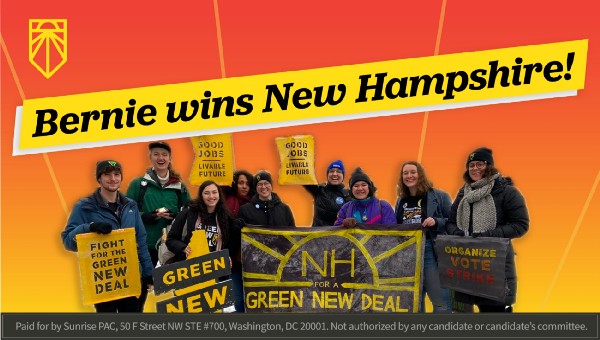 Manchester, NH — Bernie Sanders won the New Hampshire primary, dominating the crowded field and delivering a consecutive majority vote victory for Sanders. In every college precinct that our movement organized, we broke youth voter turnout records, and Bernie Sanders decisively won all of those counties but Hanover. With less than 4,000 votes separating Sanders from his closest competitor, Sunrise Movement and our partner New Hampshire Youth Movement (NHYM) together got over 12,000 young people to pledge to vote for a Green New Deal champion, and in the past month knocked over 20,000 doors and made 33,000 calls in support of Bernie Sanders in the state. This continues a sustained surge in youth voter turnout in the roundup of the first two contests of the 2020 Democratic presidential primary. Sunrise Movement and NHYM endorsed Bernie Sanders in January as the best presidential candidate to fight the climate crisis and the other urgent issues facing our generation.

“From Iowa to New Hampshire, we are showing people all across the country that organizing around the climate crisis and the Green New Deal is a decisive way to win an election,” said Sunrise Movement co-founder Varshini Prakash. “The climate crisis, along with healthcare, education, and inequality are defining issues for our generation. If we keep this momentum up and sustain historic levels of youth turnout we will be the generation that steered the Democratic Party away from systemic breakdown and towards a prosperous, safe future.”

Over the past two years, New Hampshire Youth Movement has aimed to transform the electorate by getting young people to commit to vote on progressive issues like the Green New Deal, Medicare for All, and tuition free college. In the months leading up to “the most influential primary of the most important election of our lives,” Sunrise Movement & New Hampshire Youth Movement teamed up to launch a 6-month 12 full-time organizer program, training hundreds of volunteers to build power on campuses and in communities and turn out the youth vote.

“We have decided that our guiding issues are the Green New Deal, Medicare for All, and Free College for All because we think those are the policies that young people need to really thrive in this country,” said Josie Pinto, regional organizer for New Hampshire Youth Movement and Sunrise Movement and Sunrise Movement. “Senator Sanders is not only the strongest, but the most consistent on the issues.”

The most recent polling from Data for Progress shows broad support for the Green New Deal in New Hampshire, with 89% of Democratic voters supporting it. Climate change topped the list of issues that Democratic voters are most concerned about (19%) followed by healthcare (16%) according to CNN and University of New Hampshire polling.

“What New Hampshire and Iowa prove is that 2020 is the climate change election, and the Green New Deal is the winning platform. Our generation is the largest voting bloc in the country” said Sunrise Movement co-founder and political director Evan Weber. “Together, millennials and Generation Z have the power to change the nation and the world if we continue to show up throughout the primary and in November and be the generation that delivered the decade of the Green New Deal.”