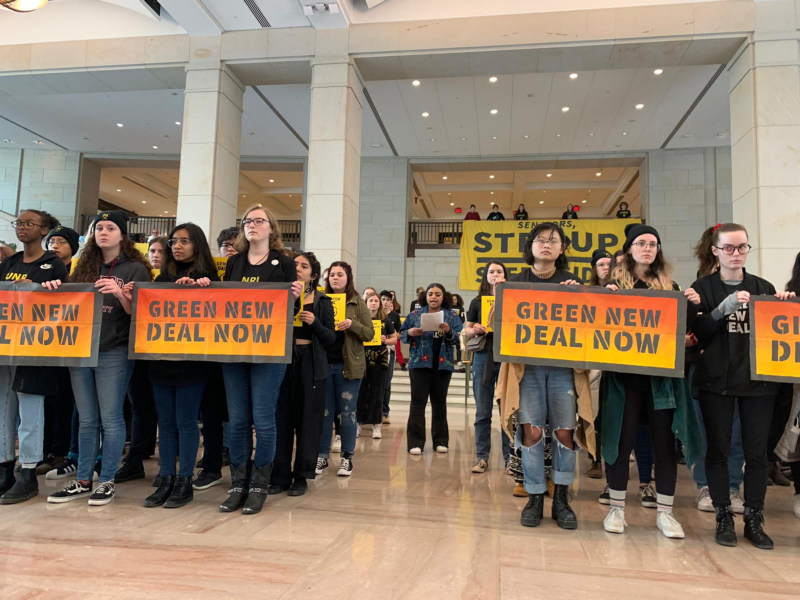 WASHINGTON — Earlier this morning, 150 middle and high school students from almost all 50 states held a teach-in at the U.S. Capitol building to demand Senators back the Green New Deal. 20 teens, one as young as 13, were arrested inside the building. The rest of the group continued the demonstration outside. Organizers promised similar action in the coming months as young people around the country prepare for massive mobilizations on Earth Day. This marked a turning point for the middle and high school climate strike movement in the US, which has largely focused on less escalated and political school strikes.

“We’re done playing by the rules,” said 18 year old Selene Santiago-Lopez of Wake Forest, NC, one of the arrestees. “Our entire lives, we’ve seen politicians failing our generation and our communities. People are dying, I’m terrified about what my future will look like, and it’s only going to get worse unless thousands take action and force those in power to listen to our generation. That’s exactly what we’re going to do. Building up to Earth Day this year, you can expect to see what happened today, but bigger and bolder.”

Today’s teach-in took place following Sunrise’s two-day middle and high school summit, where 150 young people participated in workshops and trainings put on by other students and recent graduates. They learned organizing and leadership skills and prepared for massive mobilizations ahead of the 50th Earth Day this April.

“Instead of leaving our classrooms for our day off, we are bringing our classroom to the capitol because our government is failing to protect our generation, and we’re terrified,” said 17 year old John Paul Mejia of Miami, FL. “The Green New Deal is about making sure that my generation — no matter the color of the skin or how much money you have — has basic rights to a safe climate, clean air and water, and a good job making our country a better place. Many of these Senators have kids and grandkids our age and we can’t believe that they don’t want to give them a livable future, so we’re here to try get them on board.”