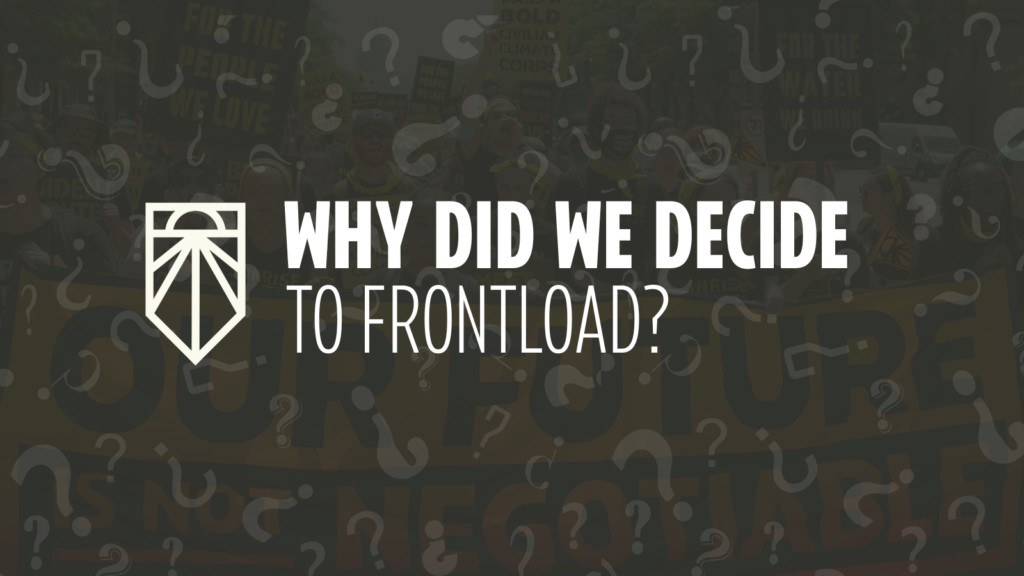 In 2015 & 2016, a group of 12 young people came together in an intense period of reflection, learning, and debate,  to build a youth climate movement that would take on the fossil fuel industry and democratic establishment, to do what was needed to address the climate crisis and create millions of good jobs in the process.  The process was called frontloading, and the movement they frontloaded was called Sunrise.

Finding Sunrise for the first time felt a little like falling in love. I went to my first training right after my freshman year of college. Sitting in this dingy basement in Philly, with the unique bright yellow Sunrise slides in front of me, an unknown source of power activated within me. I was ready to do anything and everything for the movement.

So I did. I started a hub in Minneapolis, where I was home for the summer, and then at my college. I said yes to every volunteer opportunity, every training. While in school full-time, I became the training director, where I got to meet and train hundreds of young people. In the whirlwind of it all, I dropped out of college to organize full-time.

As time went on, though, I began to see some of the cracks in Sunrise’s DNA (it’s core strategy, structure, story and culture), some of the flaws that were holding us back from building the power and movement we needed. These cracks became most evident during the summer and fall of 2019, when we ran regional summits – huge gatherings of between 200 – 500 people, in four places around the country.

One flaw; we were really struggling to recruit and retain Black, brown and working class leaders in our movement. At the Midwest Summit in Detroit and the South Summit in Nashville, there were only a handful of Black folks. Another; we were struggling to build a base, period. During a workshop I led in a Detroit theater, where I asked people to draw out the core teams and the membership in their hub structure, almost everyone reported the same problem: a strong and committed core team, but no meaningful membership beyond that. How were we going to build the type of unstoppable mass movement that could force fossil fuel elites to their knees if we couldn’t grow our hubs beyond a committed core of people?

Finally, as our movement grew in size, relationships alone could no longer hold us together. We simply didn’t have the structures, processes, or culture to be able to work together across volunteers and staff, across our different hubs, as a cohesive whole. Volunteers had no real voice in decision making, and it was harder and harder for staff to have a true diagnosis of what the base most needed. This resulted in decreasing trust between the organization and membership.  We were growing too fast to develop people well, and we had no meaningful structures to bring people in.

On top of those three challenges, as the 2020 elections loomed near, something else became extremely clear: our strategy was running out, and the political moment had changed. The DNA was built to be a powerful movement under Trump. It was designed to change the political conversation. It wasn’t designed for a moment when we had any governing power, and it didn’t really have a plan for what to do when we could actually win the things we had been demanding. It was also entirely federally focused, in a time where it was clear we’d need federal and local strategies to win.

I was far from the only person thinking in these ways. From other people on staff, to the 2019 BIPOC Caucus, to movement leaders at different summits, to partners, a lot of people were coming to the same realizations. I talked to our Organizing Director at the time, and to our leadership teams, and came to the conclusion – we needed to redesign our movement to meet the moment we were going to be in. We called this “re-frontloading”, because it was a process based off of what Sunrise had done before it had originally launched.

A 13 person team of staff and volunteers was built across race and class – first running an open selection process, and then an intensive selection and interview process, with the final team approved by Hub Council and the Directors team at the time (more here on the criteria and team selection process). We came together and asked the questions, what we were trying to win, how we were trying to win it, the organizing methodologies we used, the core parts of our culture, the narratives we told, how we related to each other and the structures we were in – in short, almost everything – and asking the question: how do we design this so we can build a powerful movement that can win a Green New Deal? All along the way we got into conflict, debated, agreed, researched, interviewed people, consulted, read a lot, and taught each other.

Frontloading hasn’t been easy. We spent months unable to meet and build a strong team because of COVID. The 2020 elections meant that we could barely assess the political moment we were going to be in. Organizationally, Sunrise went through intense conflict around what it meant to build a movement across race. Though we attempted to make frontloading participatory through visioning sessions, content testing and roundtables, we didn’t have the democratic structures to consistently engage most of the movement in the DNA design process. It’s incredibly clear that very few people outside of the frontloading team have been able to feel like they had a stake in, understand, or could explain the DNA until very recently. For a team of people who so deeply love Sunrise, love what it could become, these challenges were difficult to swallow.

In spite of the challenges, I’m still so incredibly proud of what we have done and how we got here.

We got input & feedback from thousands of folks in and outside of Sunrise. We’ve held visioning sessions with the movement, content testing sessions with members, partners, the public, and staff. We’ve hosted roundtables to get final feedback on the core bits of the DNA. And I believe deeply in the DNA. We’re experimenting with some of the most difficult things that social movements have to face – building a movement across race, class, and geography; figuring out how to be nimble and member-directed; balancing the need for local and national action. And the ways we’re doing it are new, innovative and brave, placing us in a long tradition of power-building while being creative about our tactics and approach.
In the midst of worsening political conditions and an ever looming climate crisis, in three weeks, this phase of Sunrise, of frontloading, comes to an end with a ratification vote, where all active Sunrise Movement members will have the opportunity to review the proposed Sunrise 2.0 Movement DNA and vote on whether to accept or reject it. My hope is that we ratify, that we can begin to experiment with the new DNA, and that we become a movement that hundreds of thousands of young people, too, someday fall in love with.