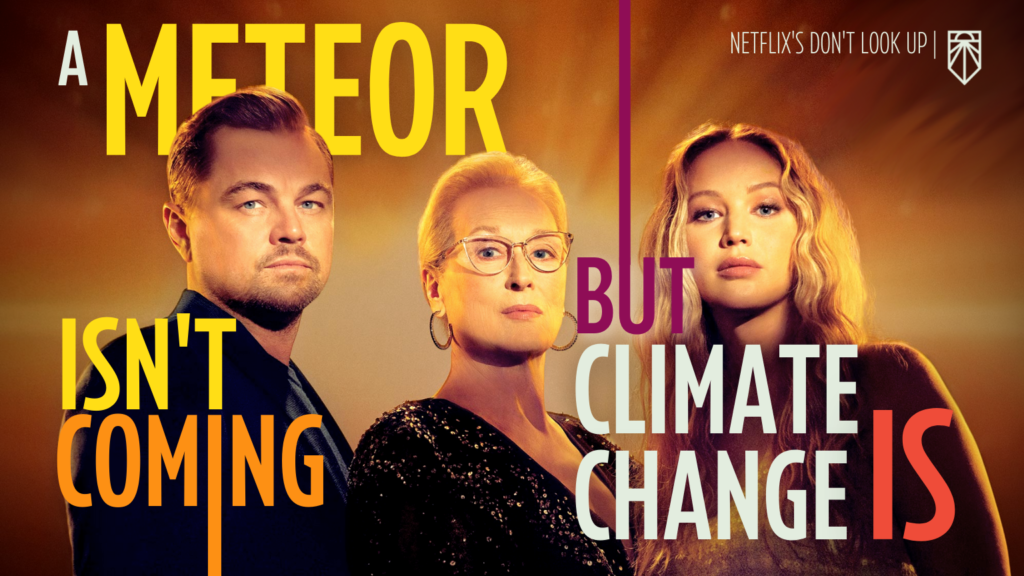 Don’t Look Up is a parable about the climate crisis, a mirror held up to the modern moment. Look past the absurdities, and the message is clear: We are in a global climate emergency. The people in power are self-interested and incomptent. Oh yeah: And we are going to die unless we do something. Now.

If you haven’t seen the movie, go watch it. Yes, for Ariana Grande’s new song, and Timothee Chalamet as a romantic punk, but really: a young person, in the climate movement, I’ve never felt so seen.

But before I get into the doom of it all, throughout the movie, clips flashed of life, big and small, that makes this world so special. It was a good reminder of why I’m an organizer in the Sunrise Movement: I love this planet, and I love it’s people. I love being alive, and I feel so lucky to exist at this very moment, and to feel love in all its forms–anger, fear, sorrow, joy, excitement, awe, wonder. It is truly a privilege to be human.

Don’t Look Up was a good reminder that the science of climate change is real and it’s radicalizing.

This planet is a privilege, and we will lose it and all that we love unless we organize a movement ready to take on the government, take over the Democratic party, take down the fossil fuel industry, and engage in creative, militant, civil resistance. It is the only way we will survive the crisis of climate change.

I walked out of the theater (tbh in tears) but with the question hot in my heart: How are we going to pull up on this slow death spiral and equip a generation to execute our mandate for political revolution? How are we going to stand in defiance of the end of the world as we know it, commit to our vision of a liveable future, hold each other accountable to that responsibility?

Because just like the movie, the federal government too spineless to take on climate change: Build Back Better, the legislation sprinkled with real climate commitments we worked so hard to make politically possible, is a bare minimum attempt at mobilizing the government to combat the climate crisis, and even that is stalling out in the Senate. I refuse to die because Joe Manchin wants to keep making millions off his fossil fuel investments, and the Democratic party is unable to stand up to the oil, gas, and coal executive oligarchy that controls this country and fight for the rest of us.

Because just like in the movie, the billionaires are going to answer climate change with but how much can I profit? In Don’t Look Up the world puts their trust to destroy the asteroid in someone a lot like Musk–and spoiler: it doesn’t end well and he takes his best billionaire friends and leaves. When their toys aren’t enough to save the planet, the billionaire class will ensure capitalism survives the death of the planet and colonizes the rest of the solar system.

I want to reach through this screen, grab you by the shoulders, shake you and scream LFG.

I feel like Jennifer Lawrence breaking down on the talk show, or DiCaprio red faced yelling into the camera. The stakes of this fight will only get higher, the suffering will become more painful, and we will only have to continue to demand immediate, transformative, imaginative change at the biggest scale. The human mind created the climate crisis, capitalism, and fossil fuels–and the human mind can imagine, organize, and build the world that comes after. We are the only obstacle, and imagination is our only limit.

I’m an organizer in Sunrise because I want other things in life. My friends and I talk a lot about our dreams if not for the climate crisis. We did not grow up aiming to spend our lives metaphorically, and sometimes literally, screaming at the people in power about the asteroid hurtling towards Earth. I want to just be the 25-year-old I know I am on a parallel planet: a struggling writer, overwhelmed in graduate school, stupidly in love and talking about the names of our children with the girl I just swear I’m going to marry. Because in that world, I can have faith in a future, one habitable enough to feel okay having kids and investing my youth into a PhD. In that world, it doesn’t feel like we live on the edge of the end.

But I’m in Sunrise to cultivate a faith in the future, so that one day, maybe, this world is closer to the parallel one of my dreams. My dreams only live in the version of the future that includes a habitable Earth. My dreams can only flourish in a United States that mobilizes against climate change, with institutions committed to intentional justice. My dreams only live if I am committed to acting even if the government does not, embodying true civil resistance to the climate crisis, telling all the young people heavy with despair the truth of our trauma, and offering a path of real hope.

The truth: This moment we live in is the end of the world as we know it. We will die if we do not get serious about the plain facts of climate change, the absolute recklessness of our fossil fueled way of life.

The path of hope: make a generational pact rage against the crisis, grounded in love and all that is worth fighting for, keep faith in each other, realize the power of our collective resistance, and act on the answer to–and what are we going to do?

The brilliance of Don’t Look Up is that it told the truth: An asteroid is heading our way and we are going to die unless we look up, square the existential crisis on our crosshairs, and mobilize the full force and power of human will, imagination, and social organizing to survive it’s impending impact. We need to look around–on this December day of record-breaking warmth, at the end of 2021, another hottest year on record–the climate change crisis is already here.

Really: what are we waiting for?